In recent years, Microsoft has made great strides to improve product security. This momentum can be seen clearly in their investments in security-focused processes, development, and research. The release of anti-exploitation features such as DEP, ASLR, Stack Cookies and SafeSEH are products of their commitment to security. Unfortunately, SafeSEH was incorrectly implemented on some versions of Windows leading to a loophole in the technology.

For quite a while, exploit developers would leverage the Structured Exception Handling (SEH) functionality to execute shellcode.  In order to frustrate exploitation, Microsoft added SafeSEH to the Microsoft Visual Studio .NET 2003 compiler. The SafeSEH feature allows only legitimate exception handlers to execute. It is implemented in two parts; a compile-time part and a runtime component.  The compile-time component begins when a module is compiled with the SafeSEH linker flag. First, the compiler will gather a list of legitimate exception handlers within the program. The compiler then stores the list into the executable module within the Portable Executable (PE) Load Configuration optional header. Within this header, a pointer named the Safe Exception Handler Table points to the list of exception handlers. Later, when an exception occurs, the operating system exception handling code uses the runtime component of SafeSEH, which ensure all exception handlers are legitimate before execution is transferred to any handler. 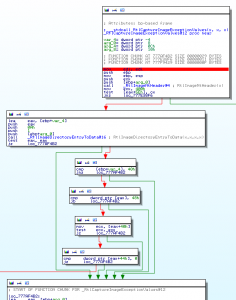 Looking directly at a binary leads to an interesting discovery. As shown in Figure 3, the size of the Load Configuration within the data directory of msvcr71.dll is actually 72. When determining the module’s compatibility with SafeSEH, the comparison with 64 fails and all addresses within this module are treated as a legitimate exception handler.

The DATA_DIRECTORYitem size (in tooltip)

Using the dumpbin program from the Microsoft Compiler, it is clear that the module is intended to be compatible with SafeSEH. Figure 3 shows the relevant output with the anomalous value highlighted in red. However, as was stated previously, if any module has a Load Configuration Directory size other than 64, certain versions of Windows will assume the module is not compatible with SafeSEH. Therefore, some modules that are compiled with SafeSEH compatibility do not possess the intended protection. A scan of an updated Windows 7 SP1 machine revealed PuTTY 0.61 and various VMware products also contain binaries with an incorrect directory size, proving that the scope of this issue is wider than a single DLL.

Windows XP SP3 contains a different implementation in ntdll. In that version, an additional check permits the data directory item size to differ from 64 so long as it matches the size contained within the Load Configuration data itself. The more permissive check present on Windows XP SP3 correctly processes msvcr71 and the use of arbitrary addresses as exception handlers is correctly blocked.  Therefore, Windows XP SP3 is not affected by this issue.

After discussing this issue with Microsoft, it became clear that this is only an issue when the original RTM version of the VC7.1 compiler is used. Contacting MSRC led to an investigation being opened. During coordination, the issue was initially classified as a defense in depth measure and not as a vulnerability. MSRC specifically stated, “Considering this, we don't have fixed a specific timeline for defense in depth issues, but it will be surely addressed in a future security update.” Thankfully, Microsoft made good on that statement and released an update addressing the issue on January 10th, 2012. More information is available from their MS12-001 Security Bulletin and Security Research & Defense blog.