In this blog post, I will cover how I uploaded the WinAutomation screenshots to Azure container storage from a virtual machine that was created by an Azure Automation runbook without any human interaction using Invoke-AzVMRunCommand.

Now that the test environment was complete and the virtual machine (VM) could run WinAutomation processes, I needed to upload proof that the simulated user workflow executed correctly. During the Robotic Process Automation (RPA) simulated workflow, several screenshots were taken and stored on the virtual machine. I decided that these could be used as proof of successful execution. The critical step here is to upload the screenshots from the VM running WinAutomation to an Azure container before the test environment was deleted, which happens at the end of the flow.

My initial thought was to run this command using a custom script extension, similarly to how I copied the Proccess.dat file over in Using Azure Custom Script Extensions to Copy an Updated WinAutomation Database for RPA. However, I learned the hard way that there is a limit of one custom script extension per virtual machine.

Azure cli provides the az vm run-command as a way of executing commands on an Azure virtual machine, but az cli commands are not allowed in automation runbooks. The solution I found was to use Invoke-AzRunCommand. Invoke-AzRunCommand allows command execution on Azure virtual machines and can be executed with automation runbooks.

Invoke-AzRunCommand requires several parameters for proper execution. One of those parameters is -ScriptPath, the path of the script to execute. I could have had script already on the machine, but that would be one more additional requirement needed on the base image and I wanted to limit base image requirements as much as possible. Instead, I had the runbook write the script at runtime so it could be executed from temp directory used by the runbook. The runbook that leverages Invoke-AzRunCommand looks like this.

After the required parameters and service principal authentication sections, there are two main commands listed under #Create Script and #Run Script. Create Script creates a script.ps1 file that zips the screenshots and uploads the file. The Run Script command executes the script.ps1 file from the temp directory.

When the flow gets to this step, it will perform the actions in the runbook above. 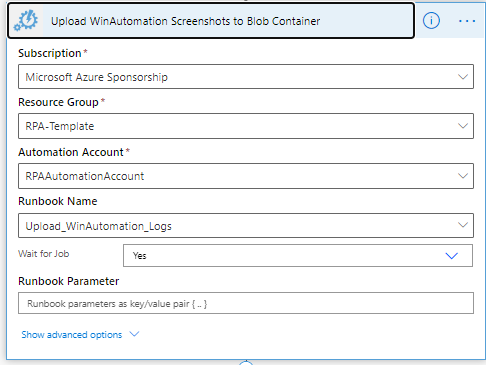 This is what the process looks like at a high level: 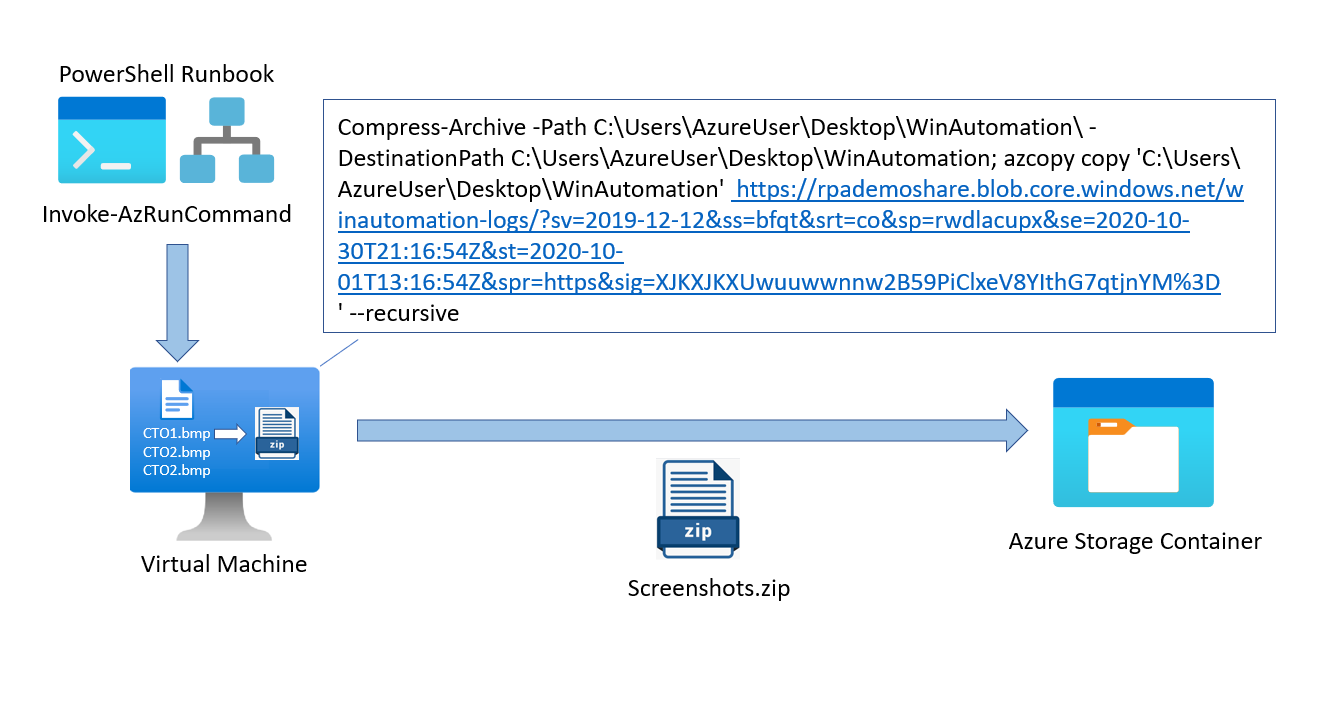 Verification that the zip file has been uploaded can be done through the Azure console by viewing the container:

In the next and last post in this series I will cover how I used Power Automate Flows and Azure Runbooks to tear down Azure Resources and reply, with proof, to the original flow requestor that execution was successful.

END_OF_DOCUMENT_TOKEN_TO_BE_REPLACED

How to copy updated WinAutomation databases for RPA with Azure custom script extensions – part five of a series.