Part two in a series.

In part one of the series, I outlined a scenario in which an attacker could start with a container compromise, perform a container breakout, host compromise and move on to Kubernetes and IaaS reconnaissance. The attacker had to achieve multiple objectives (in combination with several developer errors) to make the scenario possible. Despite these conditions, the scenario itself is not only extremely plausible but may have already occurred in the wild. 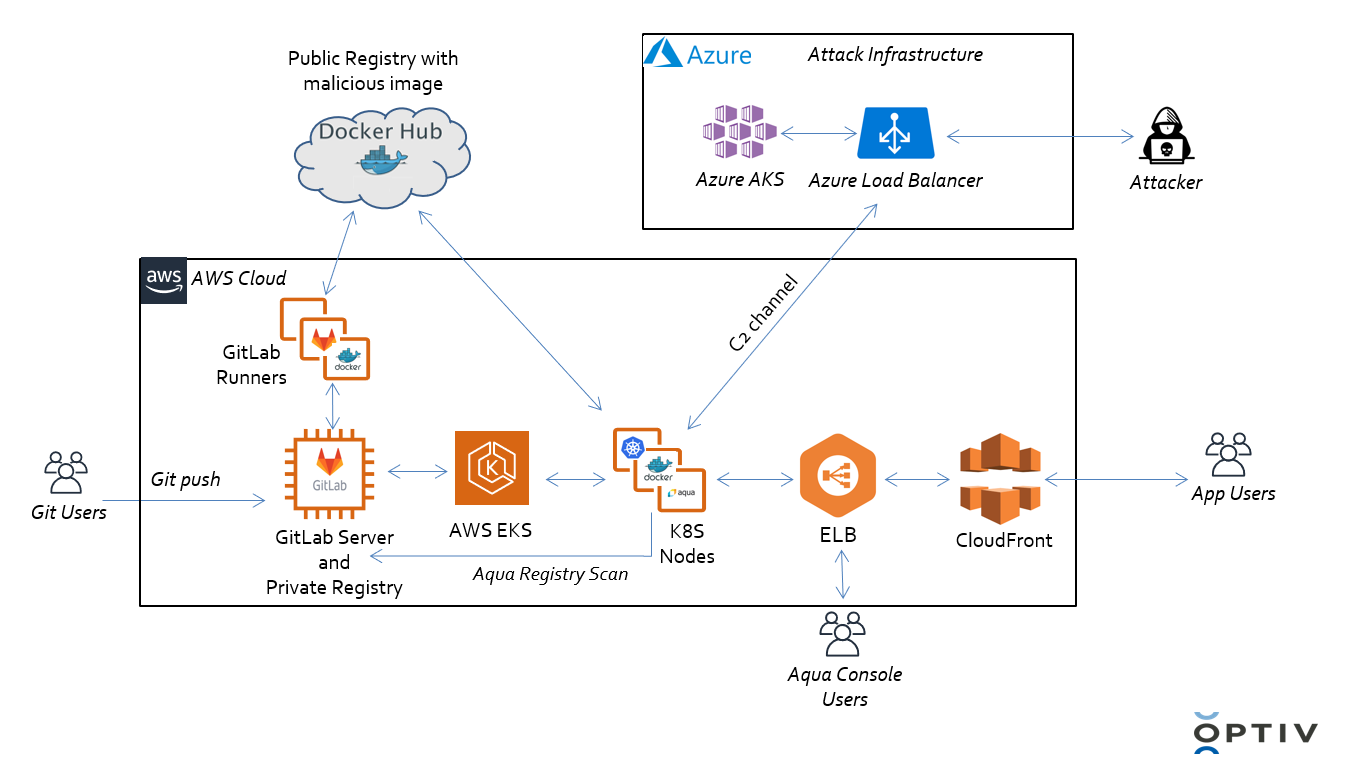 Let’s break down the five phases of the scenario to analyze how Aqua Security can help security teams prevent the attack.

[Note: this post only addresses Aqua Security as it relates to container and Kubernetes security. it doesn’t cover the IaaS components available by way of their recent Cloudsploit acquisition.]

The scenario begins with an image preloaded with malware. So, how can we derail the attack before it even starts? Perhaps you have heard of “Shift Left,” a term that refers to enhancing security as close to the beginning of the CI process as possible. For example, this entire scenario can be averted if an “Aqua Scan” stage is placed in the gitlab-ci file used to build the image and deploy the container. By adding a few simple lines of code, the image can be scanned post-build and pre-deployment to ensure it meets the compliance and security checks imposed by your organization. The code snippet below illustrates an Aqua Scan stage. 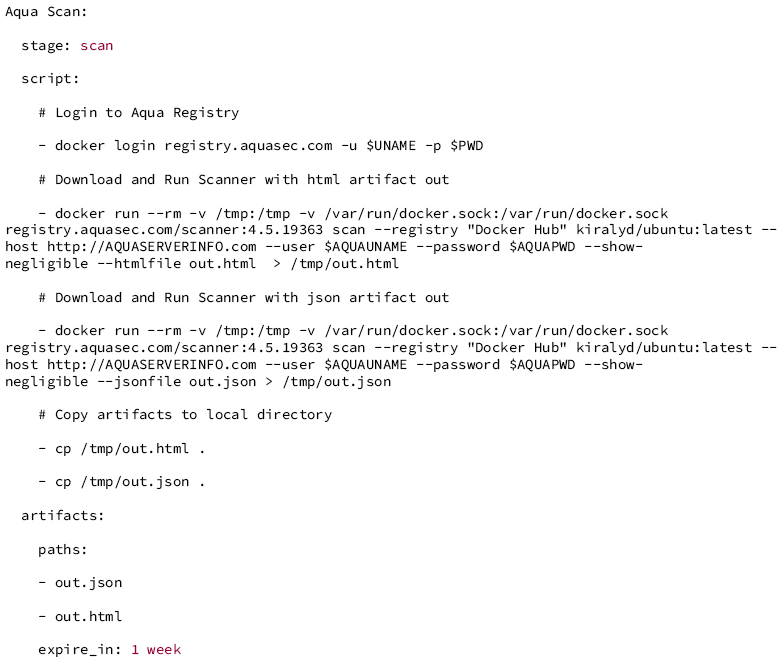 If the image doesn’t meet the policies applied during the scan stage, the job fails until the developer takes remedial action. An example is shown here.

The Aqua Cloud Native Security Platform (CSP) provides default Assurance policies for these types of scans and provides the ability to create custom ones. For more granular policies, Aqua even provides a way to create individual compliance checks that can be added to an assurance policy. 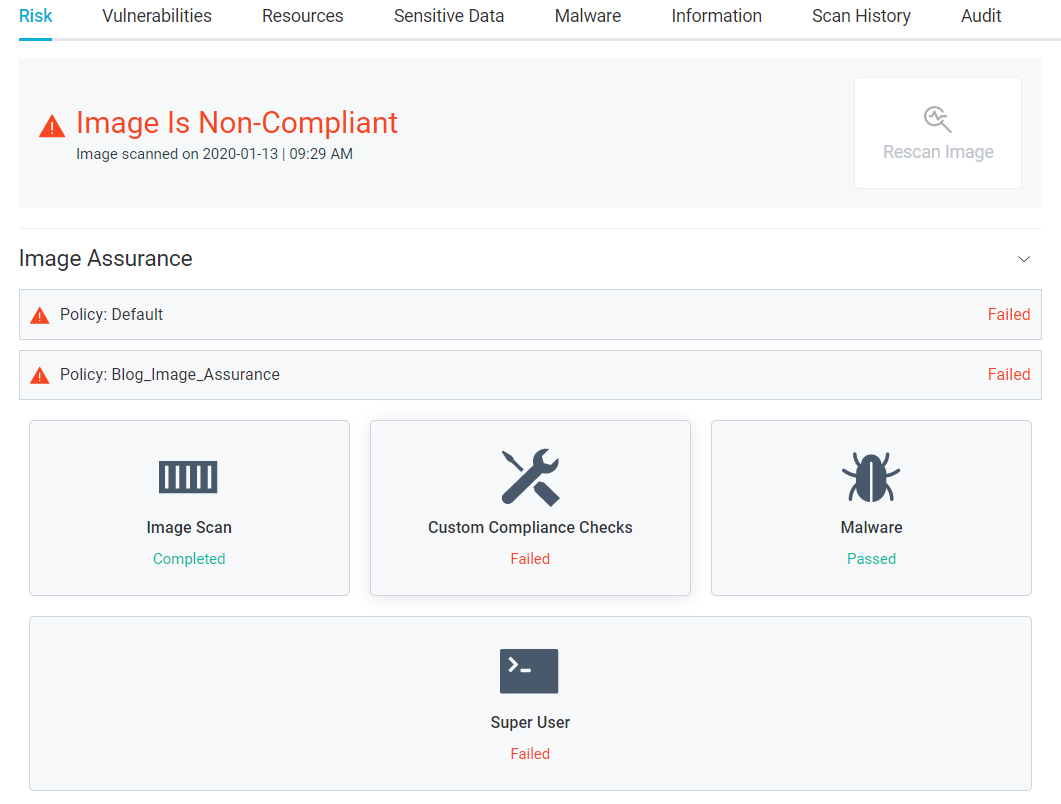 Note that the malware for this post was not flagged by Aqua. The same image was scanned by other technologies with the same result. However, the Aqua scan stage would have stopped the scenario before the malicious image was used in a deployment task. The image was not registered (approved) and it was using root privileges. Which brings us to step 2… 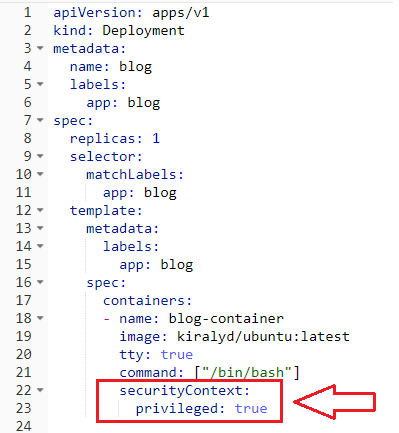 Aqua not only allows us to identify the use of privileged containers, but it can also prevent them from being deployed. Aqua’s Risk Explorer shows us that the privileges used in the container running kiralyd/ubuntu:latest image are running as “Super User” and that the container is privileged. 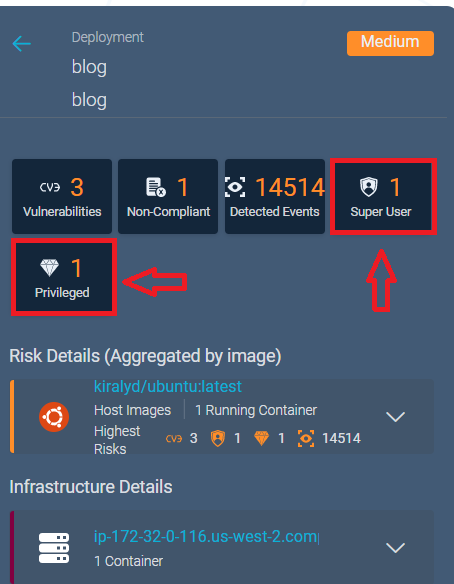 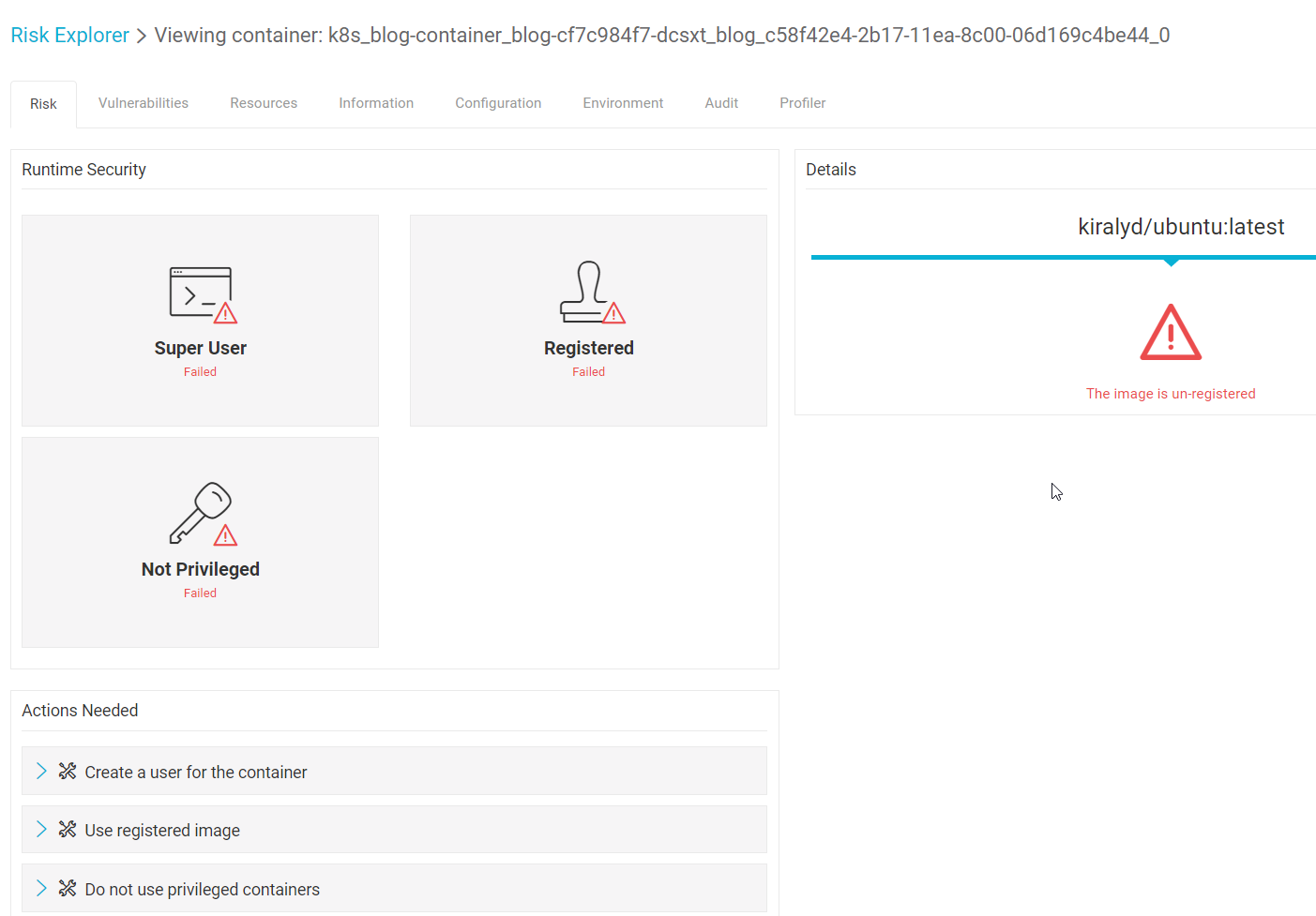 …and on the Configuration tab of the container Risk Explorer. 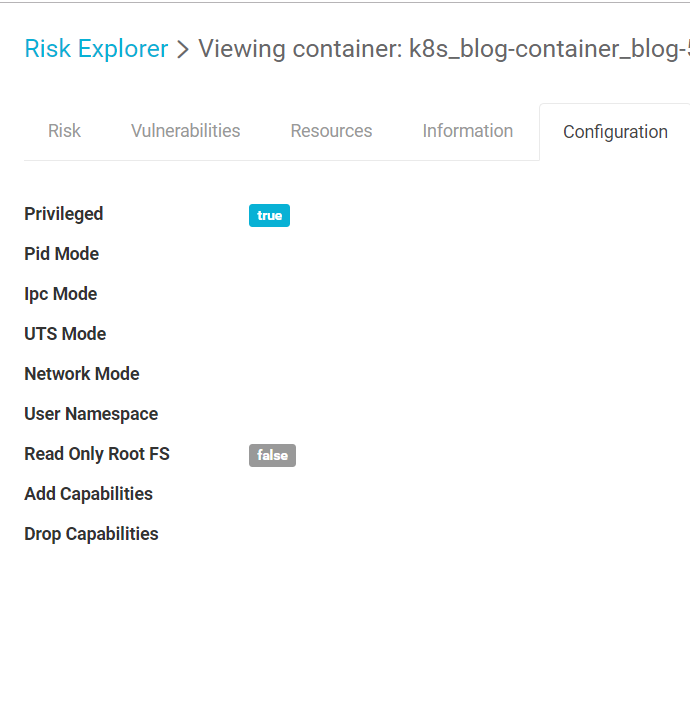 After the initial container deployment a connection is made to the C2 sever located in Azure. It isn’t necessary for the attacker to be in Azure, but we decided to test the level of difficulty associated with it. Regardless of where the C2 server is located, application developers should understand the necessary ports and protocols used by each container. This way Aqua firewall policies for each container can be created to prevent any unnecessary inbound, or in our case, outbound network connections. 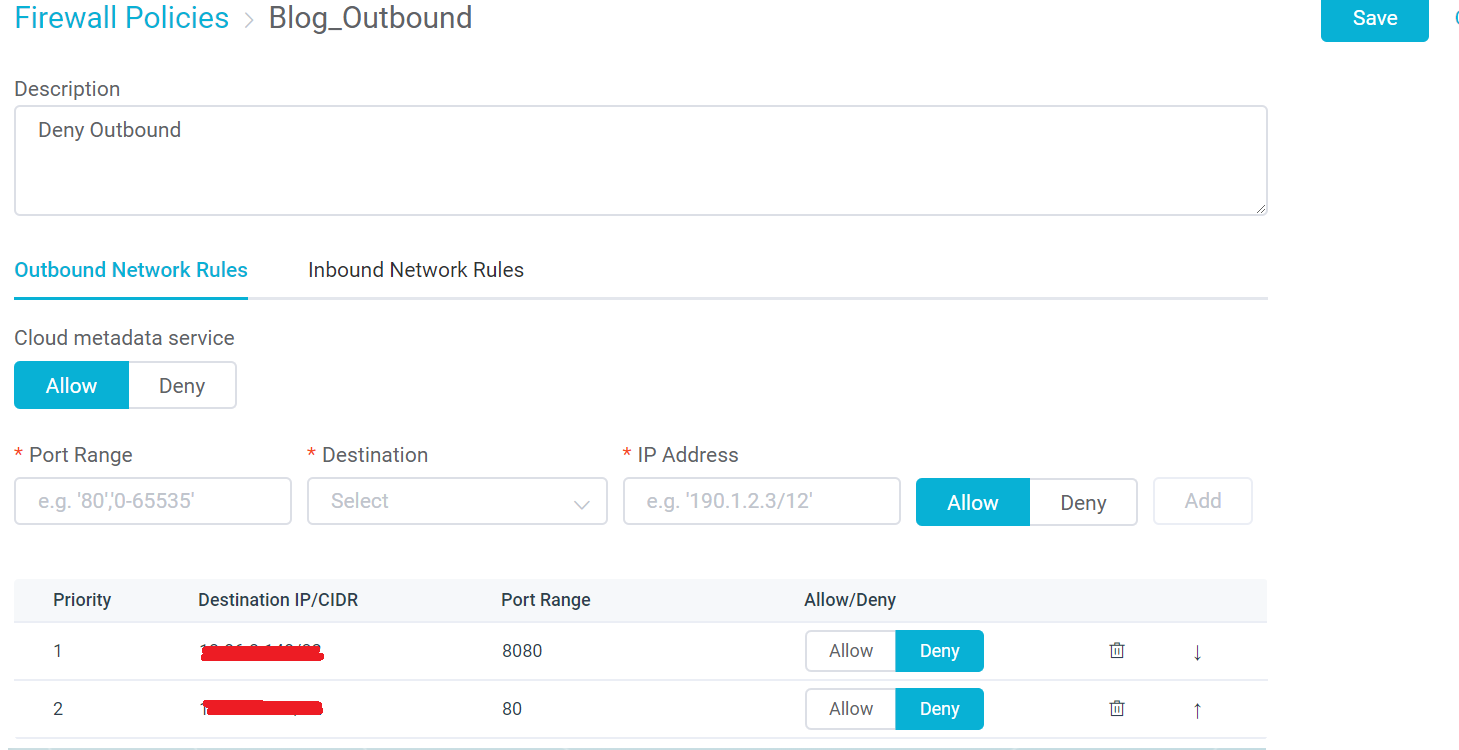 Even if the developer is unsure of all the needed network connections, Aqua CSP can record the network traffic, affording the administrator the ability to create rules from captured connections. 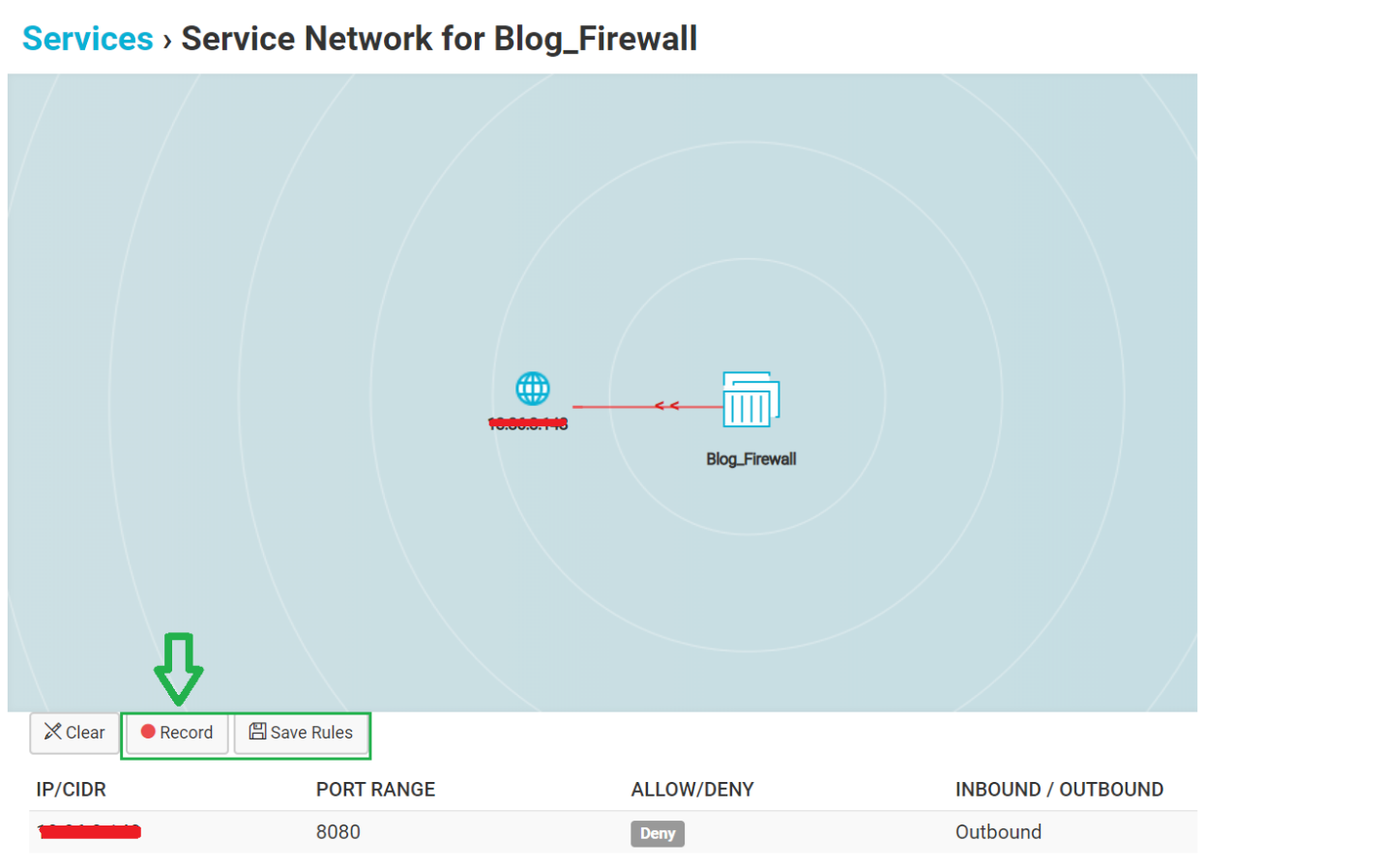 Once the container firewall policy is applied any connections made to this IP address and/or port number will be blocked and an alert will be created in the Aqua console. Administrators logging into the UI will see there are blocked alerts associated with any connection attempts made to the command and control server. 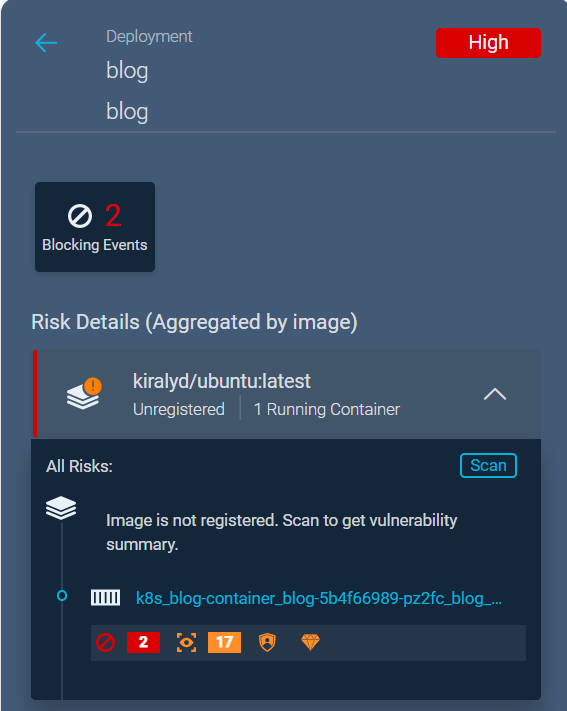 Greater detail about these events can be found in Aqua’s Audit view. The event is accompanied with information that includes the alert category, action, IP/DNS, port, Aqua response, policy and details. 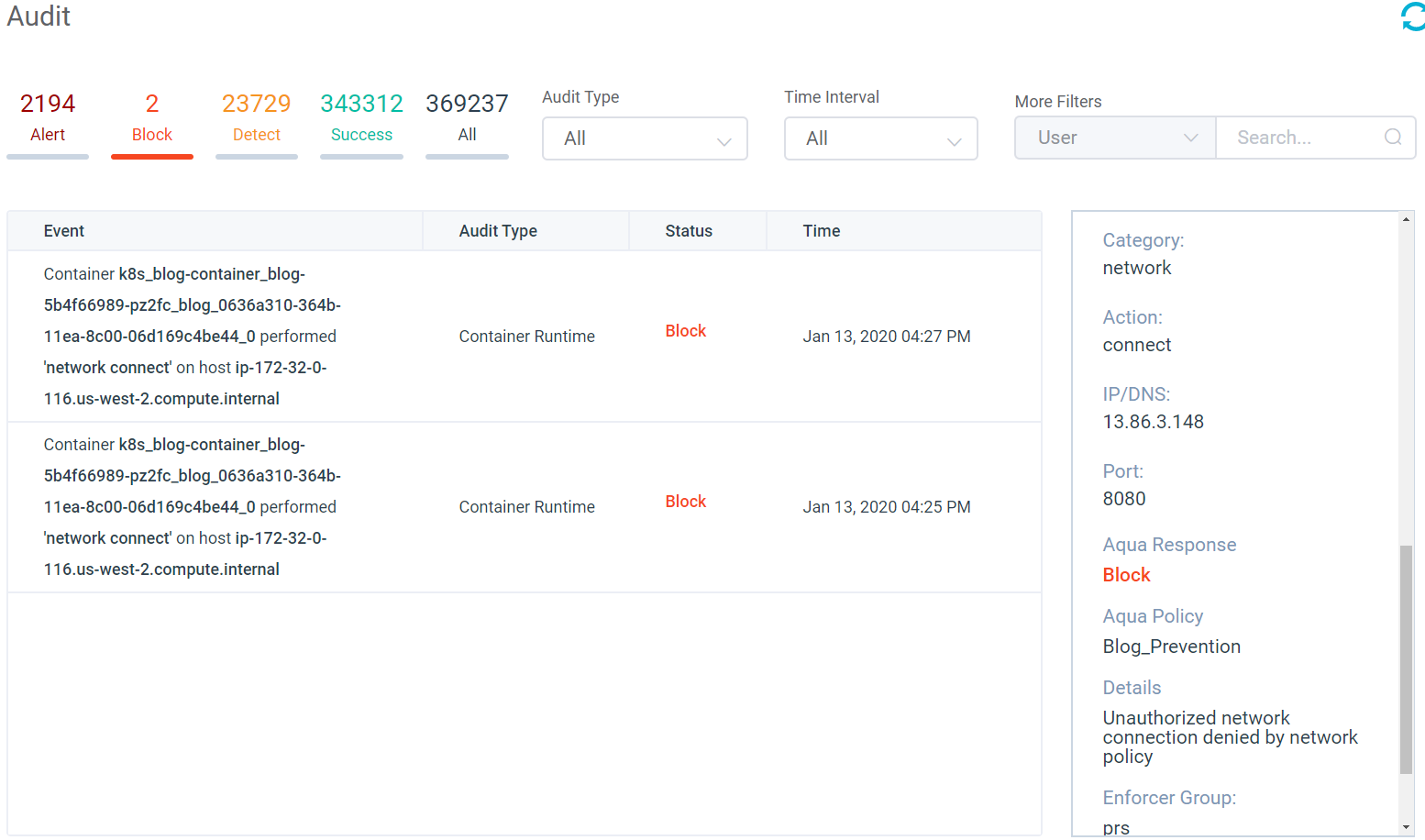 The image above shows how simple the file block creation is and the result of the policy is shown in the container below.

As shown below, the code used in the breakout also required the host to execute chmod and curl.

Similar to the container runtime polices, the Audit tab will display the block alerts associated with host runtime events that match policy. 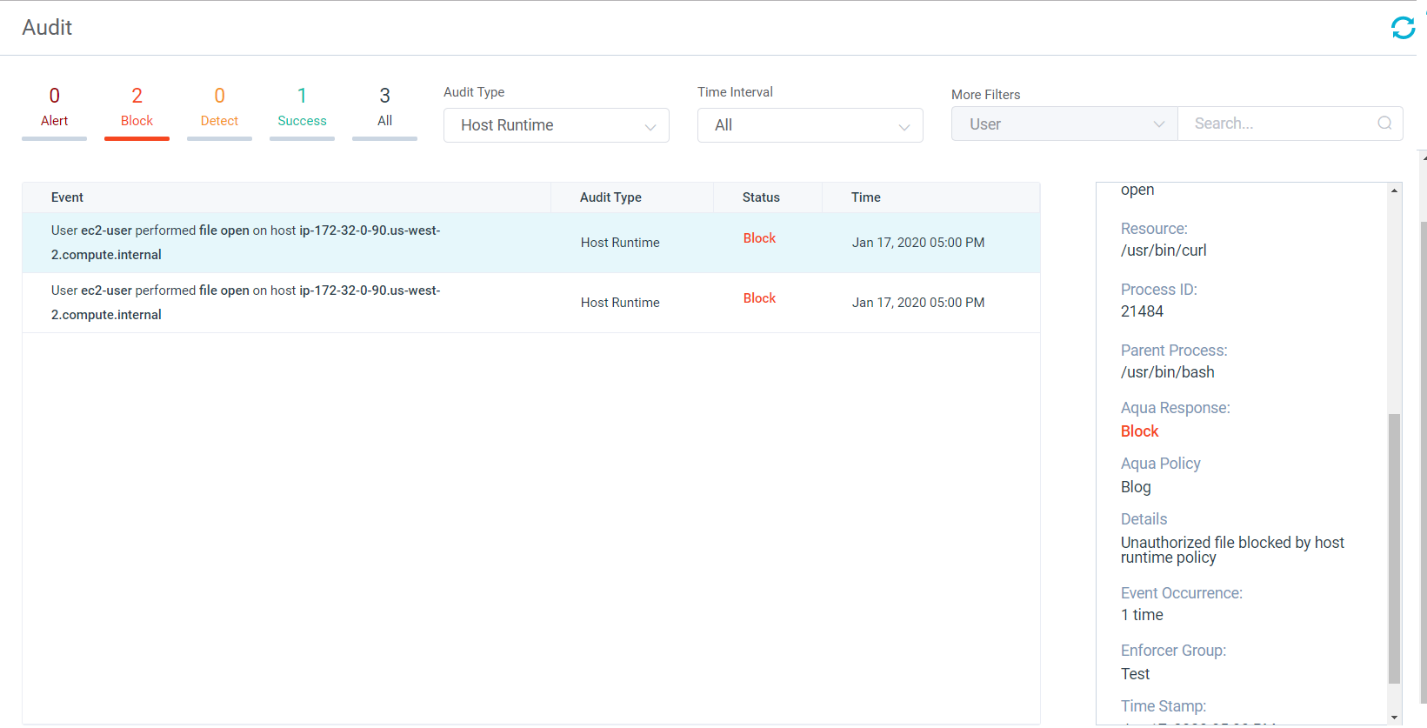 There are numerous ways in which an administrator, with a little thought and a few minutes in the Aqua console, can prevent the attack scenario outlined in this series. The prevention methods discussed here are only some of the options offered Aqua Security CSP. We encourage you to explore how Aqua can be best employed safeguarding your development environment.