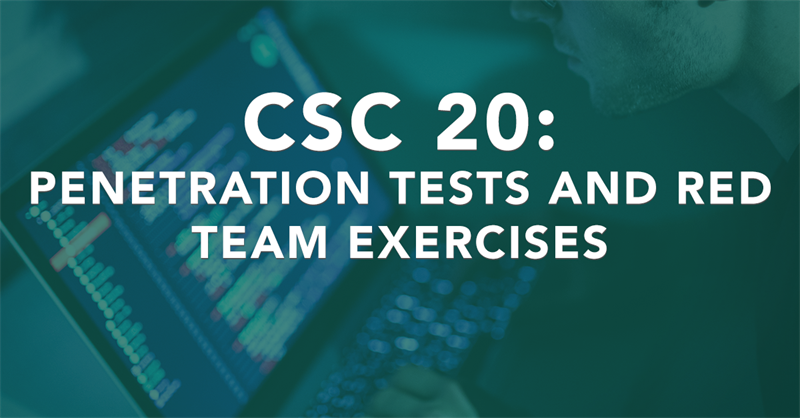 Test the overall strength of an organization’s defenses (the technology, the process and the people) by simulating the objectives and actions of an attacker.

A Twist: The Attack is the Solution

We now move into our final step of the Top 20 CIS Critical Security Controls. Throughout the series, we demonstrated how attack scenarios can be leveraged to take advantage of the lack of, or misconfigured, controls. A penetration test is the next logical step after you have implemented these controls to ensure that the controls have been implemented correctly.

A penetration test comes in many forms depending on the organizational need, company hired and end goal. I have broken these into four main types of tests performed regularly; however, there may be other tests offered to meet different goals. Either way, it is strongly recommended that you don’t just go out and buy a penetration test but that you define these goals and identify which test works best for your needs.

While all of this can sound scary to an organization just getting starting with penetration testing, going with a reputable group of proven professionals can help to avoid most pitfalls that can occur. This testing, when performed in combination with your security and technology staff, can have a greater impact as knowledge transfer both ways can really add an extra level of effectiveness to the penetration test. Assessors benefit from this conversation by knowing key areas to check into and staff benefit by learning how risky some innocuous vulnerability may be. Not all penetration tests leverage high and critical vulnerabilities, some don’t even use a vulnerability scanner. It’s important to know what your organization needs (is it compliance driven?) and wants (collaborative understanding) when selecting a company and type of penetration test.

This concludes our series on the critical security controls.

By:
Joshua Platz
Principal Security Consultant | Optiv
Joshua Platz is a principal security consultant in Optiv’s advisory services threat practice on the attack and penetration team. Joshua’s role is to execute advanced service offerings such as the advanced threat simulation purple team activity and provide thought leadership and mentorship to the practice. Joshua also executes internal and external network penetration testing, enterprise password audits, and was one of the designers and first executers of the attack surface management offering.
Share:
Related Insights
Image